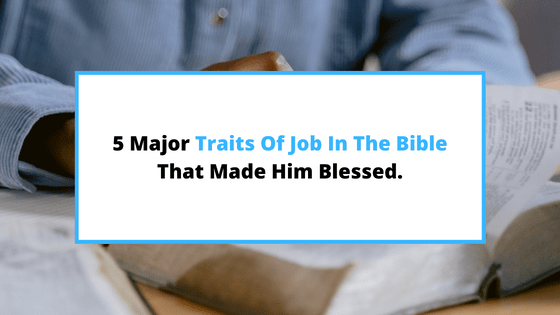 In this post, you will discover the 5 major characteristics of Job in the bible that made him special in the sight of the Lord in the old testament times.

Job was a special man who lived in the land of Uz and went through many trials and tribulations but in all his trials, he never gave up on God or his faith as most would do in similar situations.

The book of job outlines many characteristics of Job that he had which made him who he was that we as believers today can greatly learn from.

Job is a perfect example of how every Christian and believer in Christ Jesus must respond and react during trials and adversity in life.

With that said, let’s look at the 5 major characteristics of Job in the bible that we as Christians today can emulate especially during times of adversity.

Who Was Job In The Bible?

Job was a righteous man who lived in the land of Uz (Job 1:1). He had many possessions and a large family. However, he also suffered great tragedy and loss.

Job is an excellent example of how we as true Christians can suffer through many life trials and remain steadfast as well as stay faithful to God.

Despite his suffering, he never gave up on God as most would. The book of Job must serve as an inspiration to you as a modern New Testament believer not to give up your faith when trials of faith come to test and refine your faith.

Below are the 5 major traits of Job that made him a man of integrity and a blessed person on earth even after his undeserved suffering.

The first characteristic of Job as we see in Job 1:1 is that Job was a righteous man who lived a righteous life that was above sin.

Due to his righteous character, he regularly offered sacrifices and burnt offerings to the Lord as we see in Job 1:5 so that in case his children sinned and cursed the Lord in their hearts, the burnt sacrifices would atone for their sins.

By being righteous, Job did not live a life characterized by sin even when others around him lived lives that were displeasing to God.

Job’s righteous character must also inspire you to live a life of holiness and righteousness in all situations even in times of adversity as Job did who never forsook God’s righteousness despite losing everything in his life.

See Also: How To Live A Holy Life In An Unholy World? [+Sermon].

Another trait of Job we see in Job 1:1 is that Job was also a God-fearing person, which is why he lived an upright life that pleased the Lord even in his suffering despite Satan wanting him to do otherwise and curse God.

The fear of the Lord in Job’s life is one of the reasons he was a blessed man even after his adversity was over. Proverbs 15:16 tells us that those who fear the Lord obtain blessings and favor from Him. This is what we see in Job’s life.

It’s this fear of the Lord that made Job refuse to curse God and die despite the evil suggestions from his wife who Satan used at this time to make Him compromise his faith and righteousness.

You as well must learn to fear the Lord, which is the beginning of wisdom if you want to be blessed in life and obtain favor from the Lord. Fearing the Lord is what will enable you to stay away from sin and evil at all costs.

The book job in Job 1:1 also tells us that job was also a man who eschewed evil in his life. Implying that he avoided and kept away from sin and doing evil or anything that would displease the Lord.

Even in his suffering, Job never committed evil or compromised with sin as many would, which was a testament to his integrity and good character. If you were in such a situation, what would you have done?

Only you can answer that question. Job must be a reminder to you of what true Christianity is all about. If you are a true Christian, you will also eschew evil and not compromise with sin as well even in times of suffering and adversity.

Sadly, not many can do what Job did as many are in love with their life of sin due to their lack of godly character and easily compromise with sin when things get hard. You need to be like Job as well if you claim to be a true follower of Jesus Christ.

See Also: How To Have Power Over Sin In 7 Easy Steps (Video Sermon).

Job was also blameless as Job 1:1 tells us in the sense that he lived an upright life before the Lord that was above reproach and sin.

Implying that his life even in the sigh of his friends, he was seen as a man of godly character who lived his life to please God. He was filled with good fruits of righteousness and holiness.

The same must apply to you are a follower of Jesus Christ in your Christian life if you claim to be a true Christian. The apostle Paul in 1 Corinthians 1:8 in the New Testament tells us that we need to be blameless until the coming of the Lord.

If you are not blameless and toil with sin, you won’t enter heaven when all is said and done. Being blameless here means that your life must be unspotted from all the evil pollutions of this present evil world God will judge in righteousness.

Last but not least, we also see that Job was a man of integrity as the book of Job tells us in Job 27:6. Implying that he was honest truthful, and had strong moral principles he lived by.

It’s these strong moral principles due to his integrity that made him not forsake his righteousness and compromise with sin or his friends who were falsely accusing him that he had sinned due to his suffering.

Integrity is very crucial in your Christian life as, without it, you will easily compromise with sin in default times when your faith truly gets tested.

If you are a believer of integrity, you won’t compromise with sin or your godly values due to pressure from the world or evil friends to do otherwise. Hence, you will remain strong and steadfast in the Lord as Job did even in times of trials.

I hope the above 5 characteristics of Job in the bible will help you become a better Christian who never compromises their faith in God even in times of trials as Job did.

Job in the Old Testament teaches us great lessons from his godly character of how we as believers must handle ourselves in times of adversity.

In closing, if this post has been edifying to you, let me know in the comments below, and don’t forget to share before you leave. Stay blessed. 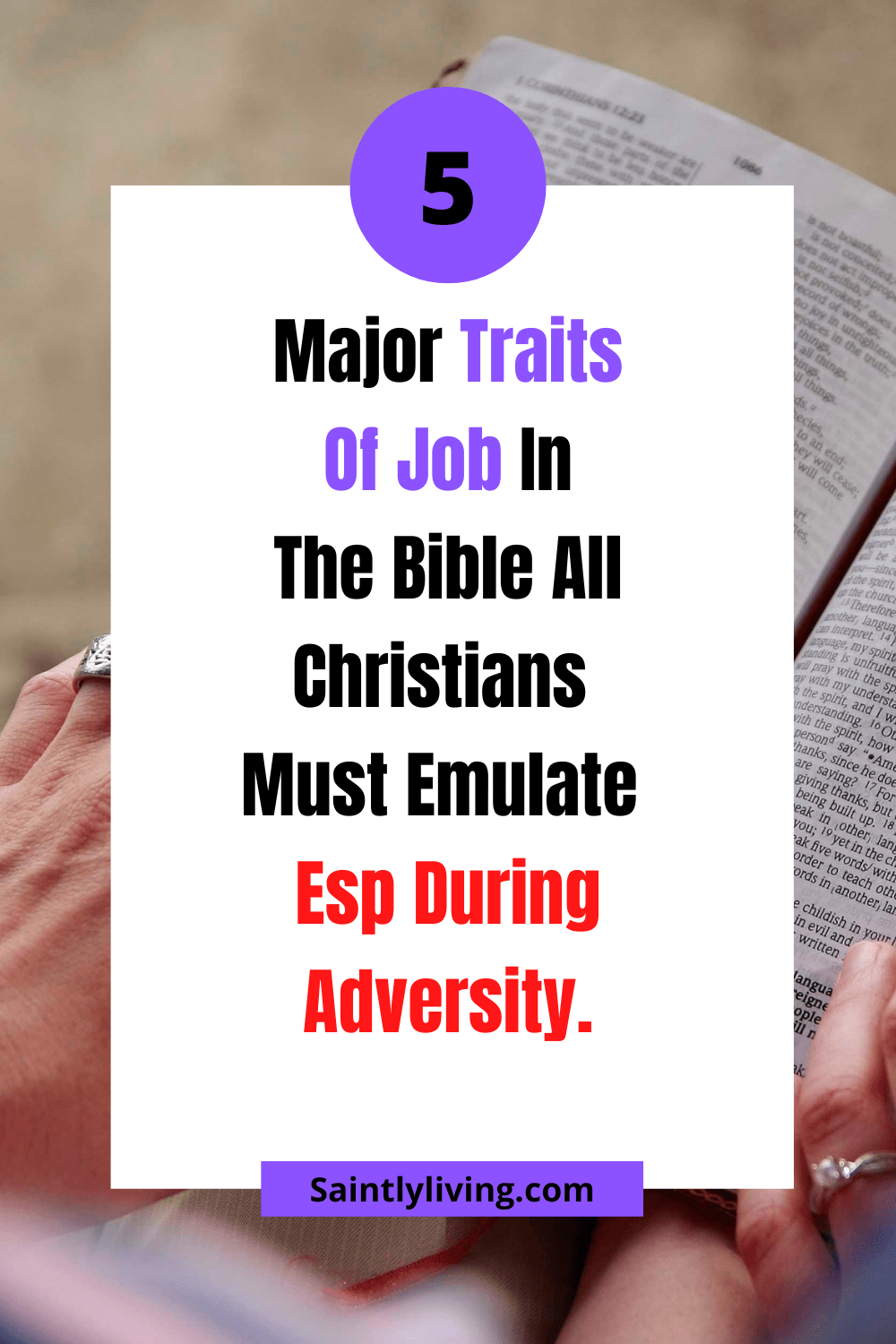