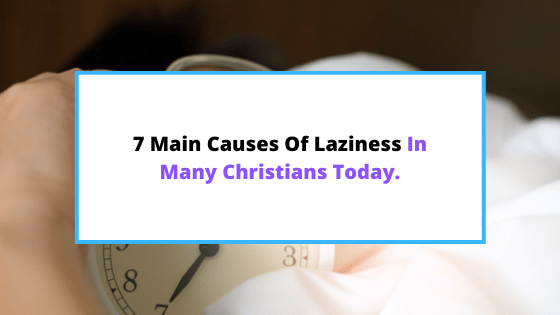 There are many reasons why Christians can be lazy in their Christian lives and this post will outline the 7 major causes of laziness in Christians today.

Spiritual laziness or any kind of laziness is frowned upon by God’s word that is why the apostle Paul tells us in Romans 12:11 in the New Testament that we must not be slothful in business but be fervent in spirit, serving the Lord.

Laziness is a silent killer of many Christians. It is the reason why many Christians are not growing in their faith, not going to church, and not serving the Lord the way they ought to.

If you are a Christian struggling with laziness in your Christian life whatever kind it is, then this post on the causes of laziness in Christians will be of great help to you, which will help, you understand why you are lazy and the solution.

What Is Spiritual Laziness?

Spiritual laziness is the inability to take action because of fear. It’s also the tendency to seek an easy way out, rather than the difficult path that God wants us to take.

When we allow fear to rule our lives, it becomes easier for us to do nothing. We become so fearful that we won’t even try something new.

Fear can creep into every area of our lives including our spiritual walk with God. When it controls us, it can lead us down a path of destruction and despair.

Spiritual laziness happens when we think it’s too much work to spend time with God in prayer, Bible reading, and meditation.

Therefore, instead of doing the things that will help us grow closer to God, we take the easy way out by trying to do things our own way and relying on our own strength rather than trusting in His power.

As Christians, we’re called to grow in our relationship with God through prayer, Bible study, and other spiritual disciplines like fasting and tithing (Romans12:11).

Yet, far too many of us find excuses for not doing these things. The result? Our spiritual lives remain stagnant or worse yet they even deteriorate. This ought not to be so dear saint.

Why Is laziness A Sin?

I hope you will agree with me when I say that laziness is a sin. I don’t mean to sound judgmental, but I am going to say it anyway. Laziness has no place in the life of a believer.

If you are lazy, then you are not doing all that God has called you to do, and that is sin. Laziness is a sin because it keeps us from fulfilling our purpose in life (Ephesians 2:10).

We were made for good works and we cannot call ourselves children of God if we are not doing those good works due to our slothfulness and folding of hands (Ephesians 2:8-10).

In the Old Testament book of Proverbs 21:25, Solomon wrote, “the lazy man does not roast his game but lies over the coals and burns himself.”

Moreover, the apostle Paul tells us in 1 Timothy 5:8 that if anyone does not provide for his relatives, and especially for his own household, he has denied the faith and is worse than an unbeliever.

In other words, if you don’t work hard in your job, schoolwork, or family responsibilities due to your slothfulness, you are just as good as unbelievers and even worse than them as some of them are hardworking.

7 Main Causes Of Laziness In A Christian.

Below are the 7 major causes of laziness in many Christians today which has made many of them unfruitful in God’s kingdom and their own personal lives.

That lack of motivation to do anything meaningful in life is one of the major causes of laziness be it spiritual laziness in many believers.

Purpose-driven Christians who know their true purpose and mission in life are not lazy people because they have no time to waste for laziness and idling around as their purpose won’t let them do that.

So, if you are a lazy person, you need to find the motivation to do something meaningful in your life if you don’t have that yet and the starting place to do that is to realize that God created you with a purpose in life and not just to water away in your slothfulness.

The lack of purpose in many people including some Christians is another major reason why most of them are lazy and don’t have any motivation to do anything productive or meaningful with their life or for God.

You need to understand that if you have no purpose in life, you will just meander and idle along in life without doing anything worth remembering in your life as that purpose to drive you to be a hard-working person will not be there.

I am sure you have read the statistics out there that say more than 95% of people in the world don’t know their purpose which is alarming indeed.

Be a purpose-driven Christians on a mission to serve God and not just sit and idle along in your life wasting your God-given potential in your laziness and slothfulness, which just leads to poverty as Proverbs 10:4-6 tells us in the Old Testament.

Believe it or not, sin is in fact the primary cause of laziness in any lazy person who doesn’t want to work with their God-given hands as Ephesians 4:28 tells all of us to do if we don’t want to come to want or be beggars who rely on handouts.

You need to understand and bear in mind if you never knew that laziness of any kind be it spiritual laziness is a sin because God never created us to be idlers. He created us to do something with our hands.

Likewise, if you don’t utilize the gifts and talents God gave you due to your laziness, you will be cats in outer darkness as well where you will be weeping and gnashing of teeth just as Jesus Chris said in the above bible verse because God sees laziness as sin.

The fear of failure is another major reason why many people are lazy in life and are not willing to try as they fear if they did, they will fail miserably.

It’s this fear of failure that has made many people including believers be lazy servants and use this as an excuse to not do anything or work with their hands.

If you are a lazy person who fears failure, you will not see the reason why you must work hard in life or at least try to do something because your fear of failure will ensure that you don’t do that but just sit and idle around wasting your time scrolling on social media.

Don’t let the fear of failure be the reason you fail to accomplish that which God meant you to do on earth and use that as a scapegoat as to why you are too lazy to do anything meaningful in God’s kingdom or your personal life.

Social media such as Facebook, Instagram, Tiktok, etc. are also one of the major reasons and causes as to why many Christians are lazy, especially in the things of God.

Nowadays, many so-called Christians can spend countless hours on social media posting and reading useless stuff that won’t even edify them or help them grow spiritually.

However, when it comes to the things of God such as prayer, daily devotion, or bible reading, they can hardly spend a good 10-30 minutes just praying or reading the bible as it’s already too much for them which is sad indeed.

Social media has made many Christians lazy and unproductive in their own lives and God’s kingdom as they waste their time there just scrolling and reading useless posts. Don’t let social media ruin your life but use it for your good and God’s.

6. Loving Too Much Sleep.

The bible in Proverbs 24:33,34 warns that if you love too much sleep to work, you will eventually come to poverty which explains why some Christians are poor and are always in want or need.

You need to remember that sleep and rest only belong to the hard-working people who are diligent and industrious in their business and not lazy people.

If you are a lazy person or Christian, just know that you have no business in desiring sleep and rest. Sadly, the opposite is the case as the lazy ones or lazy bones are the ones who love too much sleep when they should be busy working out there and tilling the land.

Stop loving too much sleep if you are a lazy and slothful person but reduce your love for sleep and put those hands and brains God has given you free of charge if you want to have plenty in your life and not to come to want.

7. The Misunderstanding Of Grace & Faith.

Last but not least, another major cause of laziness in many Christians is the misunderstanding and misapplication of faith and grace in their lives.

Unfortunately, some believers have been misled to believe that they don’t need to work hard in their lives and that all they need is to have faith and everything will magically fall in place in their lives.

But this couldn’t be further from the truth dear saint as James 2:14-26 tells us faith without works is dead. Just because you have faith doesn’t mean you must not work with the hands God has given you if you don’t want to come to poverty or want.

Remember, faith and grace in your life are not a license to laziness because if you are lazy like the unprofitable lazy servant Jesus Christ said in Matthews 25:30 as we saw earlier, you will be cast into outer darkness even if you have dead faith.

I hope the above 7 major causes of laziness in Christians have now helped you understand why many Christians are lazy and unfruitful in their lives. In closing, if this post edified your soul, let me know in the comments below, and don’t forget to share before you leave. Stay blessed. 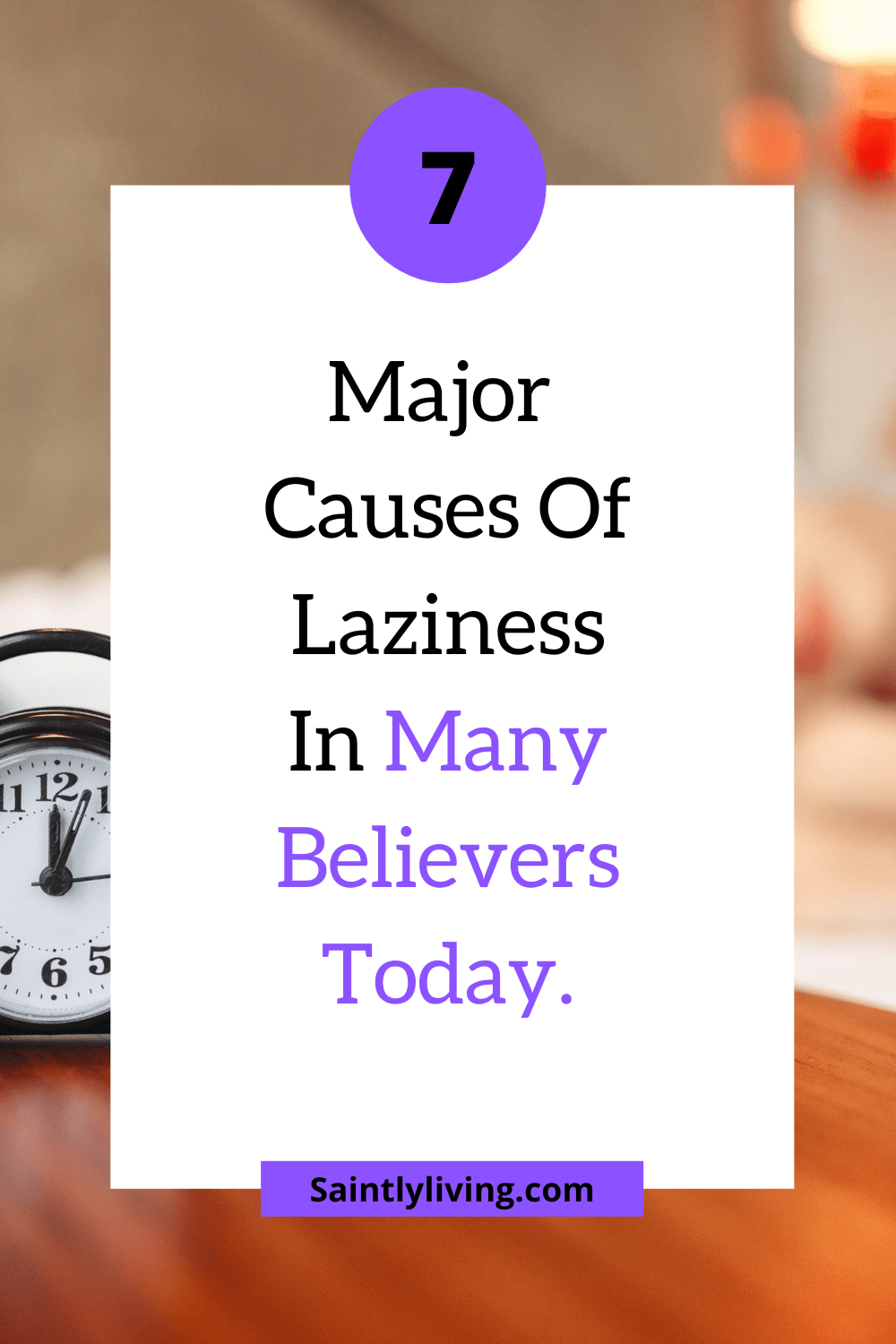