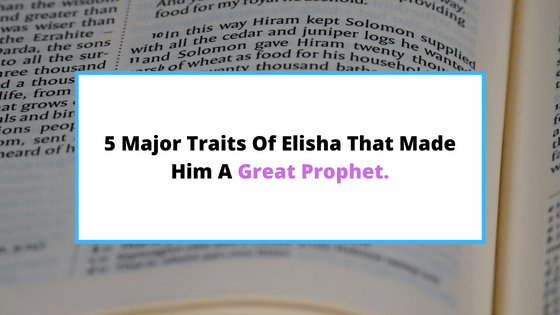 In this post, we are going to look at the 5 major characteristics of Elisha that made him who he was and what we can learn from him as believers professing the Christian faith.

Prophet Elisha was one of the most important bible characters and Old Testament prophets who lived during the time of Elijah who God used mightily due to the spirit of Elijah that was upon him.

Elisha plays a very important role in the history of Israel because of how the Lord used him in his ministry. Prophet Elisha was used in many ways by the Lord such as performing miracles as we see in the case of a Shunammite woman.

This post today will look at the 5 characteristics of Elisha that will also encourage you to be like him so that God can use you mightily as He use prophet Elisha during his time.

Below are 5 characteristics of prophet Elisha that made God use him mightily to deliver Israel from its enemies and save Israel from famine.

One of the most important characteristics of Elisha the prophet is that he was a man of faith which is why he was able to receive the double portion of Elijah as we see in 2 Kings 2:10 and do great miracles during his ministry.

Prophet Elisha was able to receive the spirit of Elijah upon him because he believed that what he asked Elijah for was possible. It’s this faith that enabled Prophet Elisha even perform greater miracles than Prophet Elijah.

One such miracle prophet Elisha was able to perform was parting the Jordan river in 2 Kings 2:14 with the cloak of the prophet Elijah had left him with when he was taken to heaven with horses of chariots.

He did so in faith by calling the God of Elijah who never failed him. The above miracles were just one of many he was able to perform during his lifetime. You as well can do great things in your life if you have this faith as well as Jesus Christ tells us in Mark 11:23.

Another trait prophet Elisha had that somehow differentiated him from prophet Elijah before him was he was a courageous prophet who feared no king or anyone as we see in 2 Kings 6:8-23.

Due to his courage, it is why he was not afraid of the whole army of Aram who surrounded him in the city to capture him as he knew he had God on his side who can deliver him from all his enemies.

Elisha was not afraid of any wicked king or anyone who plotted evil against his life because he knew that the Lord was protecting him. You as well must fear no evil as the Lord is with you and no weapon formed against you will prosper (Isaiah 54:17).

The courage of prophet Elisha is what enabled him makes hard decisions in times of crisis such as not worshipping idols of Baal when Israel was in a spiritual crisis even when others were compromising left, right and center.

Another important trait that made prophet Elisha mightily used by the Lord was his obedience and faithfulness to the instructions of the Lord as we see in 2 Kings 2:2-10. It is why he refused to leave Elijah until he received his double portion.

The obedience of Prophet Elisha to the simple instructions of the Lord especially through Prophet Elijah before him is what enabled him to receive a double portion of Elijah (2 Kings 2:10), which would not have been possible if he was disobedient.

Through his obedience to the Lord, Elisha was able to perform many miracles throughout his ministry to try to persuade Israel to repent and return to God as they have forsaken Him and turned into idol worshipping.

One such miracle we see Elisha performing was turning a spring of stagnant water in Jericho (2 Kings 2:19-21) into fresh water again that people were able to drink. Hence, saving them from dying of thirst. You as well when you obey God, great miracles will follow you.

See Also: Importance Of Submission To God [& Why It Matters?]

4. Committed To Doing The Lord’s Work.

The other characteristic we can see prophet Elisha had during his prophetic ministry is that he was dedicated and committed to doing the Lord’s work as we see in 1 Kings 19:19-21.

In the above bible verse, we can see that Elisha had to leave his farm and oxen behind to follow Elijah, which he did after slaughtering his yoke of oxen and giving it to the people to eat.

Elisha was a farmer when Elijah met him but he was willing to leave his farm and oxen behind which is why he had to sacrifice them just for the sake of serving the God of Elijah. This is where his prophetic ministry began.

Our Lord Jesus Christ also said a similar thing in Luke 9:59-62 that anyone who takes his hand to the plow and looks back isn’t worthy of his kingdom. Just as Elisha obeyed Elijah, we too must be willing to obey when Christ calls us to His kingdom service.

Last but not least, as we see in 2 Kings 4:1-7 prophet Elisha also loved the people around him especially the poor which is why he was able to minister to them.

Due to his love for the poor, he was able to help the helpless even though he knew the people he was helping wouldn’t pay him back. This is the kind of no-transactional love and hospitality God expects of us as Christians (James 1:27).

Sadly, most people don’t have this genuine love Elisha had for his people as they only help because they are expecting something in return for the good they do.

But as a person who professes to be a Christian, just as Elisha did (2 Kings 6:1-7), you need to be willing to show love and help others in small things without expecting anything in return. Only then will others know you are truly God’s child.

I hope the above 5 characteristics of Elisha will now inspire you to be a better Christian so that the Lord can use you mightily for His kingdom as He used prophet, Elisha. In closing, if this post has been beneficial to you, drop a comment below, and don’t forget to share before you leave. God bless. 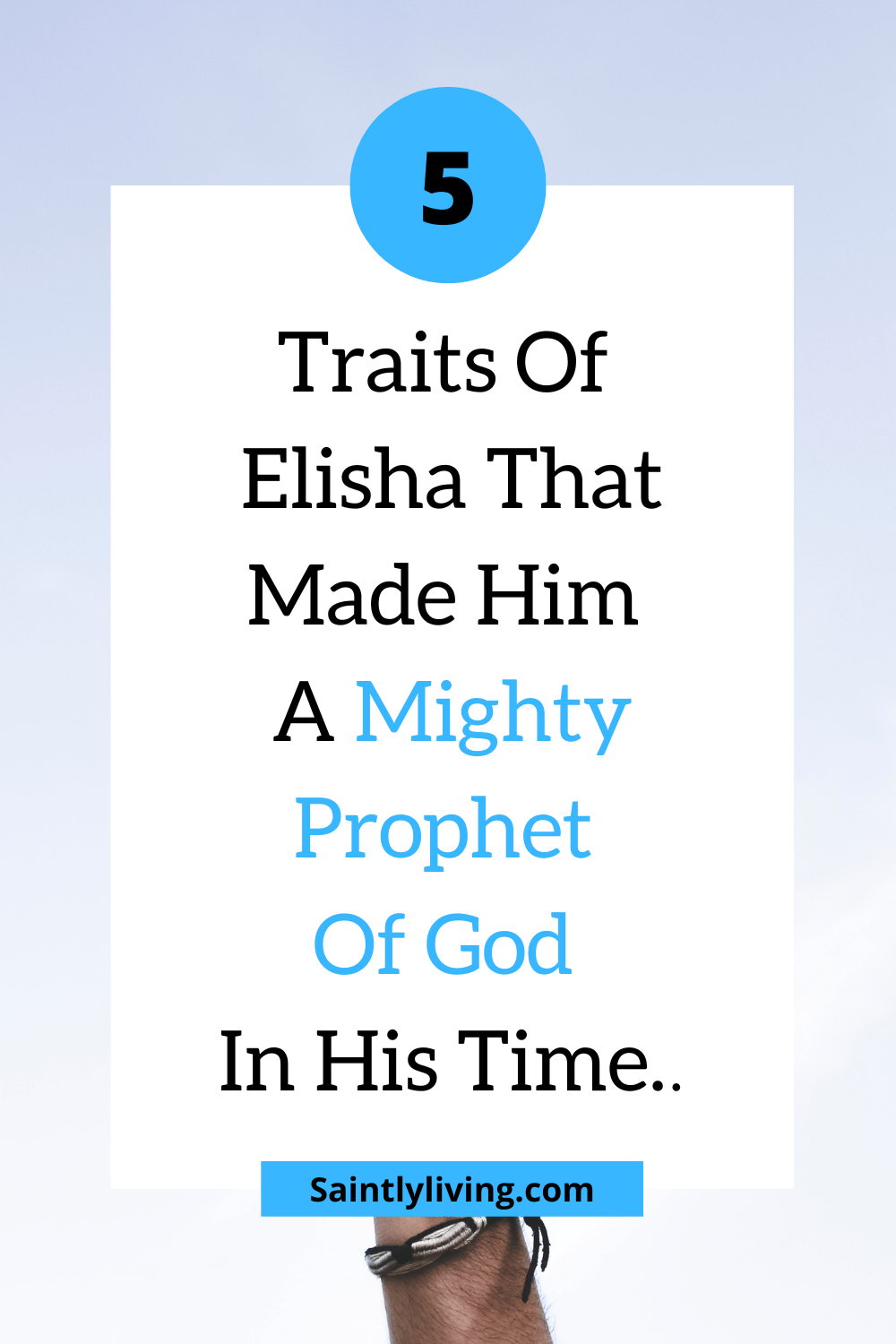