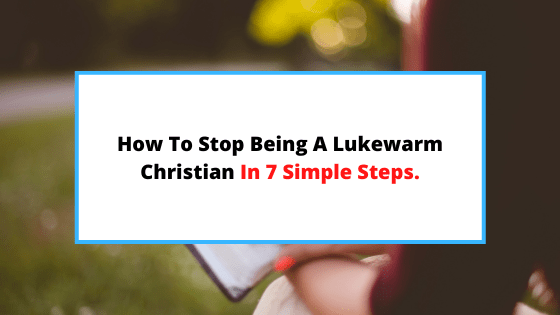 Many things can make someone become a lukewarm believer over time such as sin, the love of this world or indifference to the things of the Lord.

With that said, let’s look at the 7 things you need to do if you want to stop being a lukewarm Christian and be on fire for God once again more than ever before.

7 Steps To Stop Being A Lukewarm Christian.

1. Rekindle Your Fire For God.

If you want to stop being a lukewarm Christian, you need to rekindle the lost fire and zeal you once had for the Lord Jesus Christ when you immediately got saved.

And the way you can do that is by renewing the commitment you once had for the things of God you lost in your life due to one thing or the other.

There are many Christians today who no longer have the fire they once had for God at the beginning of their Christian life due to one thing or the other that transpired in their lives such as trials of faith, loss of a loved one, major betrayals and so on.

But if you think you have had enough of lukewarm Christianity and want to be restored unto the Lord and be on fire for Him once again more than you were at the beginning, all you need is to pray for restoration.

Remember, the Lord is in the business of restoration and if you backslid due to one reason or the other, He will restore you if you humbly come to Him and ask Him to heal you of all your backslidings as Jeremiah 3:22 wonderfully puts it.

If you want to stop being a lukewarm Christian or lukewarm believer, you need to stop loving the world and the mundane things that are of this world.

The love of the world and the things that are therein is one of the major causes of lukewarmness in many lukewarm Christians today because if one loves the world, that person truly can’t love the Father.

As Jesus Christ said in Luke 16:13 that you can’t serve two masters at the same time as one of them has to give at some point and if you love the world and the things of this world, certainly you will be less interested in the thinks of the Lord.

This is why a lukewarm Christian who loves the world find going to church or serving the Lord as something very boring to do and a waste of time to them and would rather attend parties or watch sports than to go to church which they assume is just for old people.

But if you are to stop being a lukewarm believer practising lukewarm faith, you need to stop loving the world as 1 John 2:15 tells all true believers to do.

See Also: 11 Signs Of Worldliness [That Show If One Is Worldly]

And many Christians and churches today that have become lukewarm are in urgent need of revival and a second touch of the lord which happened to the prophet Isaiah in Isaiah 6:5-9. When that second tough happen, you will experience massive revival in your Christian life.

The lack of true spiritual revival in many lukewarm believers and churches today is the reason why lukewarmness is now commonplace among many Christians today.

But if you are serious about wanting to stop practising lukewarm Christianity which won’t take you to heaven in the end, you need to be on your knees and pray for a massive spiritual revival in your life.

If you do so, you can be the John Wesley of this generation who brought massive revival in the lives of many believers during his time in Europe who had fallen into lukewarmness due to one thing or the other.

4. Stop Being In A Lukewarm Church.

You need to stop attending or being in a lukewarm church that doesn’t teach the truth, righteousness or the whole counsel of God’s word if you want to stop being a lukewarm believer.

Being in a lukewarm church that doesn’t preach about righteousness is one of the major reasons why many believers are lukewarm today and this is no surprise, especially in these last days we are living in.

And one of the reasons why many believers today prefer being in a lukewarm church that doesn’t preach about sin is that they are unwilling to endure sound doctrine of the bible concerning holiness and sin as Paul predicted in 2 Timothy 4:3.

To simply put it, many people including so-called believers are offended by the truth of the bible especially if it talks about the sinful lifestyle they are into due to the itching ears they have.

However, if want to spot being a lukewarm Christian so that you can make it for heaven when all is said and done, you need to stop being in a lukewarm church that doesn’t teach its members the truth but only tells people what they want to hear and not what the need to hear about sin.

An active prayer life is very important in your life if you are to stop being a lukewarm believer who’s tired and fade up of practising lukewarm Christianity which never leads anyone to heaven.

You need to develop your relationship with God by praying every day. Just like any other relationship, you need to spend time with God daily in prayer if you want it to grow spiritually.

Remember, prayer is what will enable you to fight and win many spiritual battles because we don’t wrestle against flesh and blood but principalities and spiritual forces of wickedness in high places as summarized in Ephesians 6:12-18.

The lack of an active prayer life is one of the major causes of spiritual lukewarmness among many believers today as most of them are just simply too lazy to even pray for a mere 30 minutes but can spend countless hours on social media reading useless things and posting trash.

If you want to stop being lukewarm, you need to dial up your prayer life in your spiritual life because overcoming spiritual lukewarmness is a spiritual battle that can only be overcome by fervent prayer.

For you to stop being a lukewarm Christian, you also need to stop attending a lukewarm church that has been partly responsible for your lukewarmness.

You can’t be a strong Christian who is biblically sound in the word if you are attending a lukewarm church where they don’t teach the truth or preach about sin and only tell their congregation what they want to hear.

And this is a major problem among many so-called Christians of this generation who only want to attend party churches that tell them what they want to hear and what will make their sinful flesh feel good.

But if you are to stop being a lukewarm believer, you need to stop going to a lukewarm church and start going to a bible believing church where the truth and whole counsel of God’s word are taught if you are serious about making it for heaven when you die.

Don’t be one of the people Paul mentioned in 1 Timothy 4:1 who will depart from the faith and heed to seducing spiritual and false doctrine of devils which is very common now in many false and lukewarm churches today.

Last but not least, to stop being a lukewarm Christian, you need to rekindle and restore your first love the Lord Jesus Christ talks about in Revelations 2:1-7 lest He removes the candlestick from its place unless you repent of your lukewarmness.

Here the first love Jesus Christ refers to is the love you once had when you immediately got saved as a new convert which made you truly committed to serving the Lord.

And this could be singing in church or doing various church activities in church but over time due to complicacy, the love of this world and negligence, this first love slowly dies off which will be seen in the decline in the commitment to the things of the Lord.

Nevertheless, if you are to stop being a lukewarm Christian, you need to remember where you have fallen or lost your first love and repent before it’s too late. 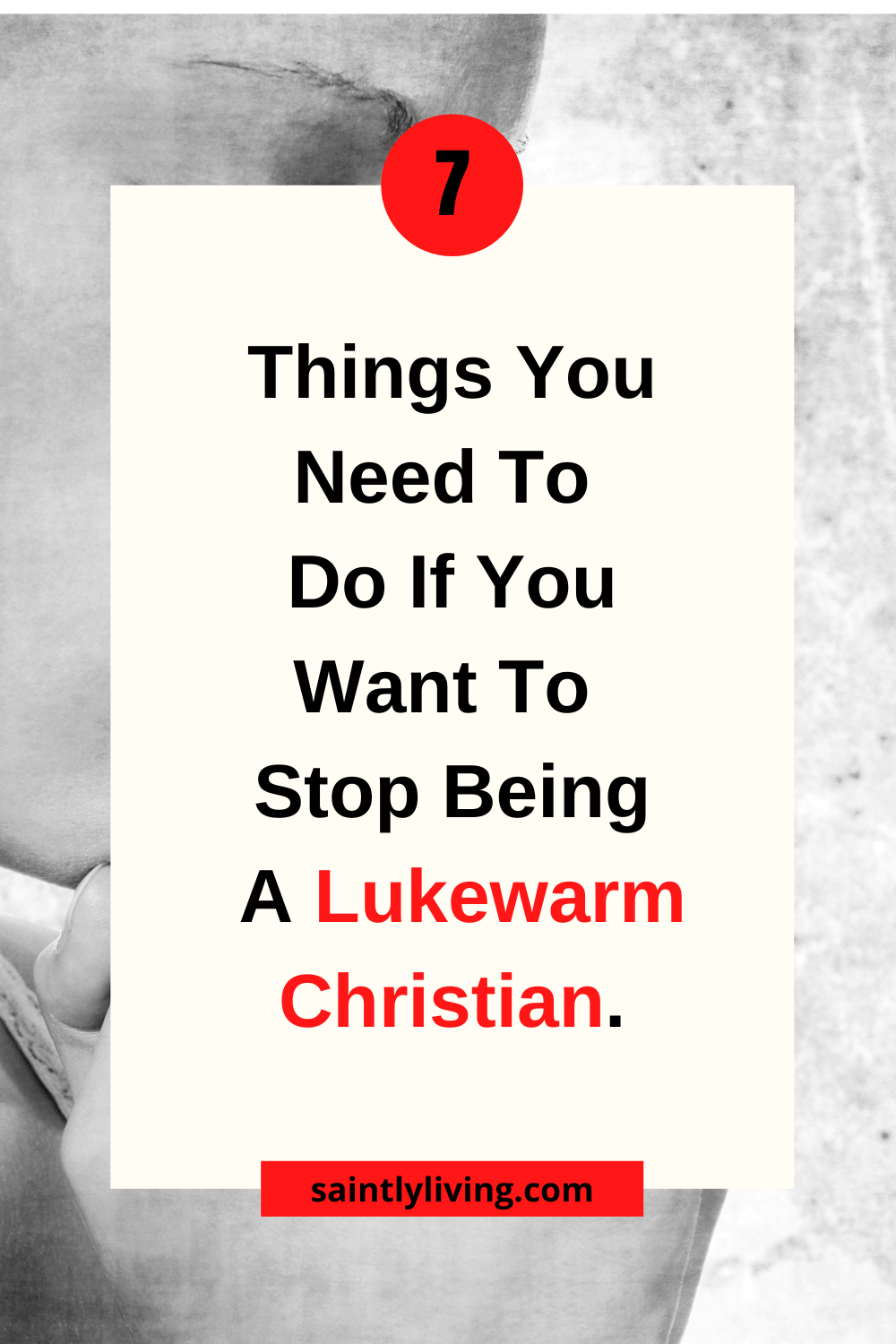