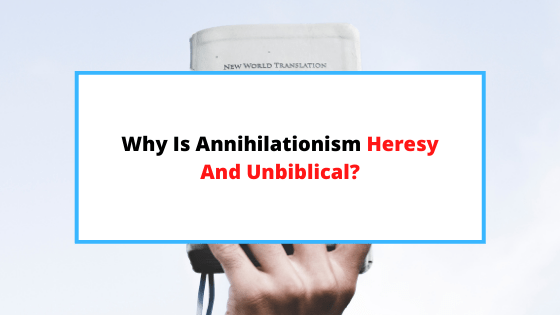 For us to answer whether Annihilationism is heresy or not, we first need to look at what the bible says about this topic with reference to bible verses.

When you google the topic of whether Annihilationism is biblical or not, you will get several answers out there. Some are for it while others are completely against it.

With that said, let’s start answering today’s question,” is Annihiliationism heresy?” by first defining what’s Annihilationism is and where it came from.

Annihilationism is the belief that those who do not accept Jesus Christ as Savior will be physically destroyed in the Lake of Fire and won’t suffer eternal conscious torment.

Annihilationism is sometimes called Conditional Immortality because it holds that the unsaved will not live forever, but will be destroyed. Annihilationism has been a minority view throughout church history and remains so today.

Most evangelicals believe in the doctrine of eternal conscious torment for those who reject Jesus Christ. The primary passage used by annihilationists to support their position is 2 Thessalonians 1:9-10.

Here, it seems that Paul is describing those who do not acknowledge God’s authority as being “destroyed” or “perish.” However, it’s important to note that Paul says this destruction has already begun and will continue until they are fully punished.

In other words, he doesn’t say they’ll be destroyed after they die; he says they’re already experiencing destruction now while they’re still alive.

Because annihilationists believe there’s no possibility of eternal conscious torment or punishment for non-Christians, they have no problem with passages like Revelation 20:10 which describes Satan being “thrown into the lake of fire.”

After all, if God is so loving, why would He confine sinners to an eternally burning hell where they will suffer eternal punishment and be tormented for all eternity?

However, this flawed thinking fails to understand the holy nature and justice of God as well as the depraved sinful nature of man.

Just because God is love doesn’t mean He will let sin go unpunished. Otherwise, that will make Him unjust considering all the evils we see happening in this world and how wicked and deplorable humans have become.

Churches That Teach The Heresy Of Annihilationism.

There are a few churches that teach the annihilationism false doctrine. These churches include Seventh-day Adventists, Jehovah’s Witnesses, Christadelphians, and Christian Scientists.

The Seventh-day Adventist Church teaches that hell is a place of eternal torment quite alright. However, they believe that after some time, God will destroy all wicked people with fire and they will cease to exist.

On the other hand, the Jehovah’s Witnesses believe that God will destroy all wicked people and create a new earth where only faithful Christians will live forever.

In short, no such thing as an eternal hell where the wicked will face eternal punishment in the lake of fire as Revelations 20:7-15 tells us.

The Christadelphians, believe that God destroyed all wicked people long ago when he flooded the earth. They also believe there will be no resurrection from the dead because flesh cannot inherit the Kingdom of God.

Lastly, the Christian Science Church believes that death is not real and sickness is an illusion caused by fear or sin.

In short, Christian science doesn’t’ support the doctrine of an eternal hell where the wicked will face eternal damnation, suffering, torment, and judgment.

They believe that Jesus’ death on the cross saves us from sin and sickness, but does not save us from death itself since death is not real and therefore doesn’t need to be saved from anyway.

All the above denominations fail to understand the eternal justice and judgments of God which are just and fair because if there was no eternal punishment for the wicked, then real justice wouldn’t exist in this universe.

That wouldn’t be fair at all to let Satan, his angels, and the wicked go just like that sot free without facing the eternal consequences of the vile evil deeds they did to others.

A lot of people are confused about this topic. Annihilationism is a belief that the unsaved will be destroyed, not tortured forever in hell. It is not new, and in fact, it was a popular belief back in the days of Augustine and even earlier.

However, the idea that all unbelievers will be finally destroyed was considered heresy for many centuries, until recently when it became more popular again with books like Hell under Fire by William Lane Craig and The End of Hell by Francis Chan (both published in 2015).

The answer to this question is yes Annihilationism is heresy because the bible doesn’t support such a false doctrine as we see in Revelations 20:10 which says the torment of the wicked along with Satan and his angels will be eternal.

Since Annihiliationism does not believe that anyone will experience eternal torment and eternal judgment in the lake of fire, then annihilationists are not consistent with their own beliefs.

If they believe that God has ordained an end to sin and suffering, then they should also believe that there will be no place where sinners can go after death because there would be no need for one.

However, if annihilationists did believe in an afterlife (as most do) then they would have to admit that their view denies one of the essential attributes of God: His ability to punish sinners as He sees fit.

Why is Annihilationism Heresy?

Annihilationism is a doctrine that says that people who are not saved when they experience physical death here on earth will be forever destroyed, or cease to exist.

Annihilationism is a heresy because it denies the Biblical teaching that God will everlastingly torment those who do not accept Jesus Christ as their Lord and Savior.

Or else you must reject other parts of Scripture about God’s eternal love and mercy for all humanity, which isn’t a good way of looking at the bible.

Annihilationists argue that the Bible does not teach eternal conscious torment for unbelievers but only speaks about temporal punishment (Hebrews 9:27).

However, this argument fails because it ignores key passages such as Matthew 25:46 and 2 Thessalonians 1:9 which clearly speak about eternal punishment without mentioning any time.

Secondly, annihilationists also try to ignore what the Lord Jesus Christ directly says in Mark 9:44-48 about hell where He says that their worm will never die in the fire that will never be quenched. That doesn’t sound like annihilation to me if you ask.

What Did Jesus Christ Say About Hell?

Jesus Christ said that hell is real and that it is a place of eternal torment. He is about Hell more than any other person in the Bible.

He called it a place of unquenchable fire in Mark 9:43-48 where the worm of the wicked will not die. It’s also a place of outer darkness where sinners will be weeping and gnashing of teeth (Luke 13:28).

In Matthew 25:41-46, Jesus Christ describes Hell as a place where people will be separated from God for all eternity, which is the worst thing that will ever happen to anyone who rejects Christ here on earth.

Also, in Revelations 14:11-13, we read about how those who reject the gift of salvation and eternal life found in Christ Jesus will be thrown into the lake of fire and Sulphur where they will suffer eternal torment without end.

From the above statement, we can see that Jesus Christ doesn’t support the idea of annihilationism where the wicked who rejected God will be burned out of existence.

If Jesus Christ supported annihilationism, which states that the wicked won’t suffer eternal torment in an eternal hell prepared for the devil and his angels, He wouldn’t have said that their worm will never die in Mark 9:44 onwards.

So, from what Jesus Christ said about hell in the passages of the new testament in different bible verses, we can see that according to Him, hell is eternal and those who go there will be there forever and won’t be put out of existence.

The story of the rich man and poor Lazarus Jesus Christ taught in Luke 16:91-31 refutes annihilationism in many ways. In this story, we see a rich man who died and went to hell where he was tormented by the eternal fire of hell and worms.

He called out to Abraham who had died many years before him to send Lazarus to his brothers so that they may not come here too.

Abraham replied that if they hear not Moses and the prophets neither would they believe if someone should rise from the dead.

This can be interpreted as meaning that if these people have not been taught about God’s mercy then even if Jesus himself arose from the dead they would not believe in him either.

This shows that even though many people call themselves Christians who do not believe in God’s grace and mercy, others do believe in it.

In this story of the rich man and poor Lazarus, Jesus Christ clearly states that there will be two places for people when they die: heaven for believers and hell for unbelievers (Matthew 25:31-46).

This shows that annihilationism is false because it teaches that there will not be any eternal punishment in hell for sinners; rather they will simply cease to exist after death without any judgment or punishment when God’s word says otherwise.

I hope the above post on the question, “is annihilationism heresy? Has helped you now understand that the doctrine of annihilationism taught by some denominations isn’t biblical at all and has no backing of God’s word. In closing, if this post was helpful to you, let me know in the comments below along with any questions you may have on what you’ve read, and don’t forget to share.