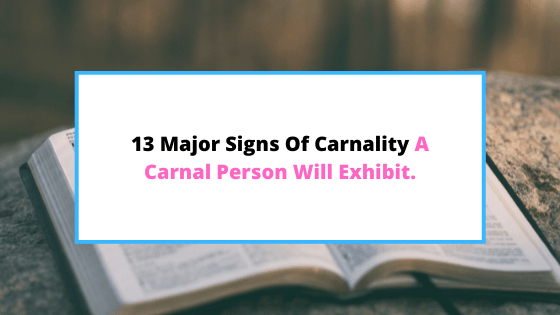 There are many signs of carnality that a carnal person or carnal Christian will manifest in their lives if they are still walking after the flesh and lack the new birth in Christ Jesus.

Carnality is a problem that many people including Christians struggle with and this and I believe that it is an area that some Christians are too afraid to look at honestly and thus have a warped or too-harsh view of what being carnal is.

By the end of this post, you will understand what carnality means and the 13 major signs of carnality to look out for to help you know if someone or yourself is carnal.

What Is Carnality? Biblical Definition.

According to the bible, carnality is simply the state of being carnal which makes one exhibits the works of the flesh found in Galatians 5:19-21.

A carnal person or carnal Christian will have a carnal mind which will make such a person live according to that carnal lustful desires of the flesh which are usually sexual.

Carnal people usually have uncontrolled sexual urges and appetites towards the opposite gender and just can’t help but fulfil the when the opportunity to do so present itself. And it’s this carnal desire for sex before marriage that leads many into fornication.

Must Read: 15 Major Traits Of A Carnal Man [Without The New Birth.]

13 Signs Of A Carnally Minded Christian.

Below are the 13 warning signs of a carnally minded Christian who practices carnal Christianity and has not yet experienced the new birth in Christ which bring about the new nature.

Lack of spiritual discernment concerning spiritual things is one of the major signs of carnality that a carnal person with a carnal mind will display.

And this lack of spiritual discernment concerning spiritual things will be so because their minds have been darkened by their ignorance and foolishness (Ephesians 4:18,19).

Remember, you can’t be carnal and spiritual at the same time and because a carnal person unlike a spiritual person cannot discern spiritual things, this will be why the bible to such people will not make sense and think it’s full of contradictions.

When someone exhibits some form of carnality in their life, they will be full of all manner of uncleanliness the apostle Paul talks about in 1 Corinthians 6:9-11.

This implies that such people will have dirty minds that are full of dirty fleshly thoughts that lead to sin and these thoughts are usually thoughts of sexual immorality.

And the moral perversions we see in society today is a result of uncleanness in the minds of carnal people who have dirty immoral minds.

A person who is carnal in their ways will lack temperance in all things which is one of the major 9 fruits of the Holy Spirit found in Galatians 5:22,23.

By being intemperate, a carnal person has no self-control over their sinful flesh and just do what their sinful flesh tells them to do even if it’s contrary to God’s word which is why we have so many illegitimate single moms and abortions today as many people can’t control their flesh.

And this lack of temperance is seen in many people including those who claim to be Christians in the kinds of sexually immoral lifestyles they are living in which is now rampant even in churches today.

The practice of carnal Christianity in one’s faith will be another sign of carnality that one will manifest if they are still carnally minded and have not yet experienced the new birth in Christ.

And there are many carnal Christians in churches today which is seen by the rampant sexual immorality among people who claim to be sons and daughters of Zion but have given themselves to harlotry. What a sad state of affairs indeed. May God have mercy.

Must Read: 13 Signs Of A True Believer [Signfying True Conversion]

Someone who is carnally minded will also show some forms of sexual perversion which is why such people can do anything to anyone even animals are not safe in the presence of such people.

All the sexual perversions such as homosexuality, lesbianism, pornography, incest, child defilement and so on is a result of carnality in many people. People are no longer afraid of flaunting their nakedness in public anymore.

The above sexual pervasion in someone who exhibits carnality is as a result of the works of the flesh Galatians 5:19-21 talks about which are active in such people.

6. No Fruits Of The Spirit.

If you are a carnal believer or carnal Christian with a mind of carnality in you, the fruits of the Holy Spirit Paul talks about in Galatians 5:22,23 will be nowhere to be seen in your life.

Instead, the works of the flesh that are mentioned in Galatians 5:19-21 such as sexual immorality, strife, lasciviousness and the like are what will manifest in your life due to the old sinful nature present in you.

The lack of the Fruits of the Holy Spirit is seen in the lifestyles of carnal people by the kind sexually perverted immoral lives they live for the sake of gratifying their sinful flesh which is just leading them to hell, sadly.

The manifestation of a spirit of haughtiness and pride will be one of the clears signs of carnality that carnal natural man will always show.

A person who is carnally minded will think highly of themselves and exalt themselves above other people and such people always think they know everything in life and that they are better than other people.

Sadly, for such people who don’t want to humble themselves before the Lord, Proverbs 16:18 warns that their fall will soon come if they continue in their haughtiness and pride.

A carnal Christian will love the world and the mundane things that are of this world more than God and this love of the world will be evident in their love for fashion, entertainment, materialism and so on.

And if you are such a person even if you go to church every Sunday, you won’t truly love God with all your heart as your heart will be completely taken away by the love of the things of this world as.

This is why 1 John 2:15-17 warns all true believers and followers of Jesus Christ that they must not love the world nor the things of this world because if they do so, clearly the love of God isn’t in such people.

9. Carelessness With The Opposite Sex.

We are told in Proverbs 6:27-33 that you can’t stand near the fire without feeling the heat of getting burned by it and this is what carelessly messing around with the opposite sex is.

See, dear reader, you are a human being and not a robot which means you have feelings that make you naturally be attracted sexually to the opposite sex and when you are careless with the opposite sex, it’s just a matter of time before something happens.

Carnality is also manifested in a person when that person shows a lack of godly contentment in their lives and such people are never satisfied with what they have.

And the reason such people can’t be content with what they have, no matter how much is due to covetousness present in their lives which makes them want more and more. Nothing is ever good enough for a carnal man.

We are told in 1 Timothy 6:6-10 that godliness with contentment is great gain because we came with nothing in this world and won’t take anything with us either when we die.

Carnal people are filled with lust and this lust could be lust for money, sex or power that control these people’s lives.

And these common lusts that the sinful flesh of natural man makes people do all sorts of funny things are mentioned in 1 John 2:16 which are the lust of the flesh, the lust of the eyes and the pride of life.

Every carnal person is controlled and ruled by one of those lusts the above verse talks about but the lust of the flesh is the most common one which is seen by the rampant sexual immorality among many young people today who have mistaken true love for infatuation.

Someone who exhibits carnality will have a carnal mind which can’t perceive spiritual things pertaining to eternal life and will be of help in the spiritual growth of that person.

A carnal mind natural man has only minds things that please the sinful flesh which is like a drug in its own way as many people are addicted to their carnal desires of the flesh which leads them to sin.

Anything spiritual is vehemently despised by a carnal man with a carnal mind because the flesh is an enemy to the spirit and vice versa (Romans 8:7). The flesh likes to sin while the spirit hates sin and these are antagonistic to each other.

Last but not least, the presence of sinful addictions in one’s life is one of the major signs of carnality in a person. They are also part of the works of the flesh Galatians 5:19-21 talks about

Sinful addictions come in all types and the common ones are drugs, pornography, smoking, drinking and many others that are ruining the lives of many people.

And many people are addicted to all sorts of things that are ruining their lives. All this is because of the sinful nature present in a carnal person that makes them be slaves to their sinful addictions but the good news is you can be delivered if you truly repent and ask forgiveness of your sins. 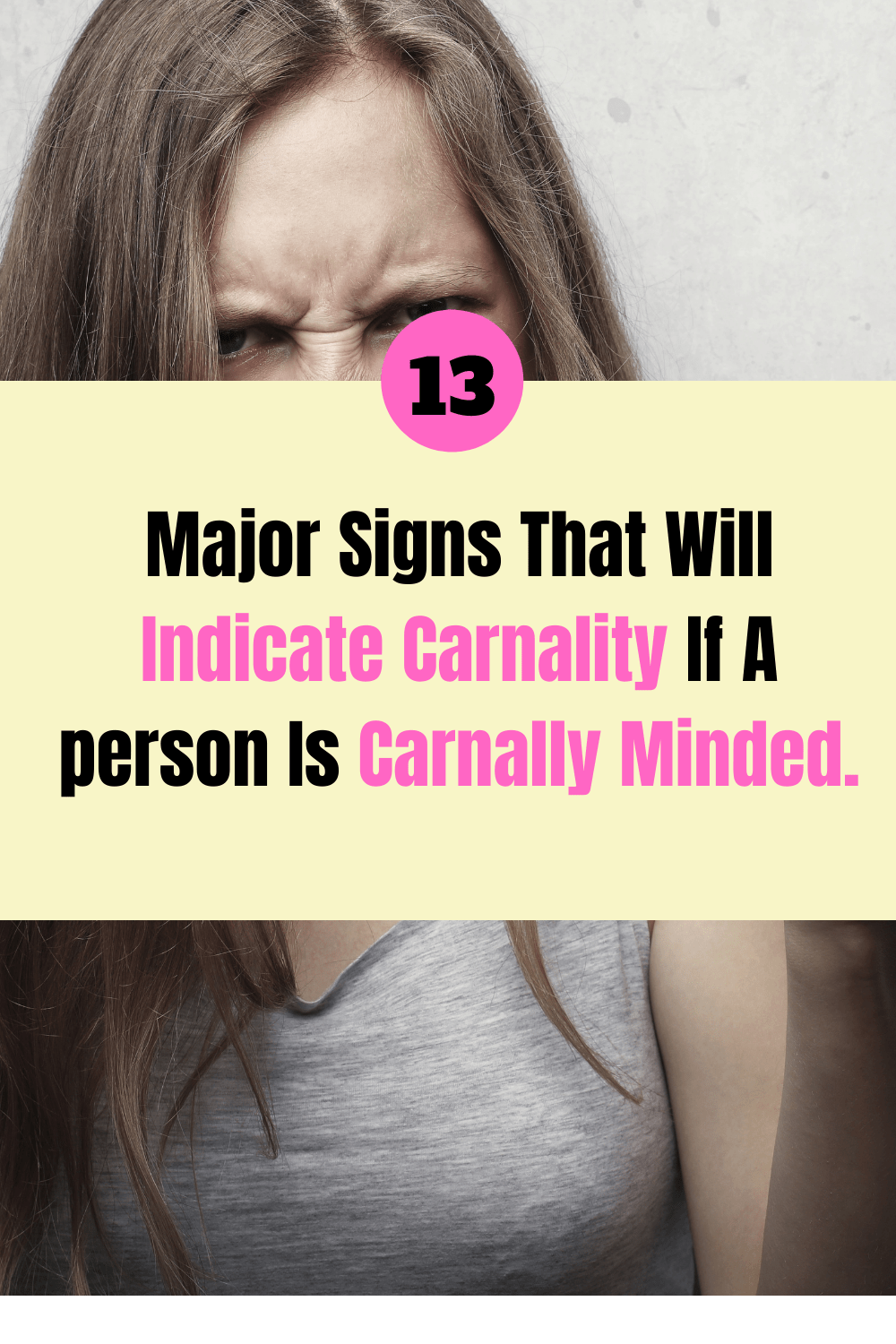