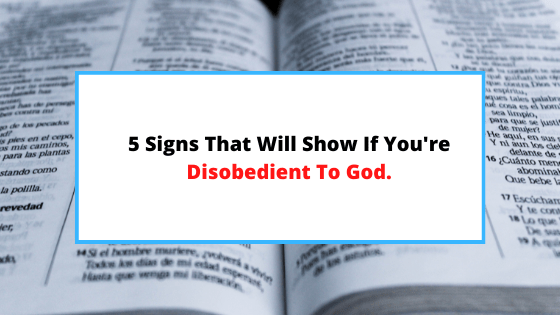 In this post, you are going to find out the 5 signs of disobedience to God that will show that you are disobedient to God and His word.

Many signs will show in your life if you are disobeying God or Jesus Christ’s teachings written in the new testament of the bible that you are not willing to live by.

The bible says that if we love God, we will live in obedience to His word. If not, then we don’t love Him at all which is the case for many so-called Christians today.

Many so-called Christians today claim to love our Lord Jesus Christ but still live a sinful life of disobedience with no interest in obeying what Christ tells us to do in the bible and such people are fake Christians.

With that said, let’s look at the 5 signs of disobedience to God that will clearly show you are still living a disobedient lifestyle even if you claim to be a Christian by going to church every Sunday.

What Is The Spirit Of Disobedience?

The spirit of disobedience is described in the New Testament as the attitude of unbelief. This is not a matter of having a wrong idea about God, but rather a matter of failing to trust him and obey His will in every situation.

By definition, the spirit of disobedience is a spirit that is found in all rebellious children influenced by Satan that makes such people rebellious and disobedient to God (Ephesians2:2-4).

It’s a spirit that makes us want to defiantly rebel against what’s written in God’s word which is the direct opposite of God’s Holy Spirit that causes us to be gentle and obey God’s word.

In the Old Testament, disobedience was often seen as an act of defiance against God’s authority over creation. The nation Israel was told by God to obey his law and commandments, but they often refused to do so.

As a result, they were punished for their disobedience with various plagues such as pestilences and humbling defeats from their enemies as we see in Exodus 32:1-35.

Just as the Lord punished the Israelites in the old for their disobedience, He will also punish you today if you refuse to repent from the spirit of disobedience in your sinful pride making you rebel against Him.

Related: 7 Ungodly Characters In The Bible [Who Disobeyed God & Their Punishments.]

5 Signs You Are Disobeying God.

Below are the 5 major signs of disobedience to God and the resulting consequences that will occur if you continue living a disobedient lifestyle.

Living in sin will be one of the major signs that will show you are living a life of disobedience to God as sin is a direct transgression of God’s laws as 1 John 3:4 tells us.

Any kind of sin you may be living in be it sexual immorality, murder, moral perversions, drunkenness, etc. are all ultimate acts of disobedience you can do to God as sin is directly contrary to God’s word which is against all manner of sin small or big.

Sadly, even many people who claim to be Christians still live in sin today and are not willing to turn away from them due to the love of sin in their hearts.

If you are such a person who is still living in sin but goes to church every Sunday, just know that you are still living a life of disobedience that Jesus Christ and God’s word don’t approve of.

And if you die in such a sinful disobedient state without repenting, hell will be your final destination where you will spend the rest of your eternity as Revelations 21:8-10 in the new testament promises to all those who disobey God.

Related: 13 Signs You Are Not Saved (Indicating Fake Conversion.)

Sadly, many believers today still live in partial obedience to God’s word and are only willing to obey certain parts of the bible while discarding the other parts that are hard for the flesh to obey. Such people are unwilling to fully submit to God’s word.

If you claim to be a true Christian and disciple of our Lord Jesus Christ, you are going to obey everything He says even if it’s hard for the sinful flesh to do that which only loves to pleasure itself in sins.

Jesus Christ tells us in Luke 14:27-33 that if we don’t fully deny ourselves by fully obeying whatever He commands us to do, then we can’t be His disciples which is the case with many so-called fake religious Christians today who are uninterested in fully obeying God.

If you are a person who’s not living in accordance with God’s word, it shows that you are disobedient to God. Joshua 1:8 tells us in the Old Testament that we must meditate on God’s word day and night and observe and do everything written therein.

By so doing, we will make our way prosperous and be blessed with good success as God always blesses His children who obey Him and keep His commandments as we see in the case of Abraham who was blessed for obeying the Lord.

Unfortunately, most people including those who claim to be religious are not willing to obey what’s written in the bible but just want to do things that please their flesh even if what they are doing is against God’s word.

This explains why sin is commonplace in the church today as the church is full of many hypocrites who pretend to be holy on Sunday but for the remaining six days of the week are worse than even heathens themselves who aren’t even religious at all.

You need to understand that you can’t claim to be a true Christian if you don’t want anything to do with God’s word which you find as an offense when it talks about the sins you are committing which you need to stop doing.

4. Unwilling To Deny Self.

The unwillingness to deny your sinful self that makes you love to sin will be another sign and indicator that will show you are living a life of disobedience.

By definition according to the bible, self is defined by that inherent fallen nature (Ephesians 2:1) in all of us that makes us want to do things our own way and not what God tells us to do.

Jesus Christ tells us in Luke 9:23 that if we desire to come after Him, we must be willing to deny ourselves no matter how hard it is to do and take up our crosses daily to follow Him. Failure to do so disqualifies us from being His disciples.

Sadly, many so-called Christians nowadays are unwilling to fully deny themselves and take up their crosses daily by forsaking their sinful ways self loves which is clearly shown by their unwillingness to submit themselves to the lordship of Jesus Christ fully.

Many people who claim to be Christians think they can live however they want be it living in secret sin and claim to be followers of Christ Jesus which couldn’t be further from the truth because if you can’t deny yourself, then you are not worthy of Christ.

Last but not least denying God’s existence despite all the proofs all around us in His creation that shows He exists is one of the worst forms of disobedience you can show to God.

Atheists are people who are guilty of this as they deny that God doesn’t exist despite all the proofs in His creation as these people suppress this important truth in unrighteousness as Romans 1:18 as they don’t want to retain God in their minds.

The bible in Psalms 14:1 tells us that such people are fools and that they are corrupt and do abominable deeds as they deny God’s existence despite His creation proving so and refuse to have faith in Him.

So, if you are an atheist reading this, just know that you are foolish and the worst fool in God’s eyes because you deny God’s existence even when the creation around us says otherwise.

Atheists deny God because Satan has darkened their hearts and you need to come to repentance so that God opens your mind, which will help you stop doubting His existence if you are such a person.

I hope the above 5 signs of disobedience to God will now help you know if you are being disobedient to God or not so that you can repent where necessary if you discover that you have been disobedient to God in one way or the other in your life. Stay blessed and don’t forget to share before you leave.