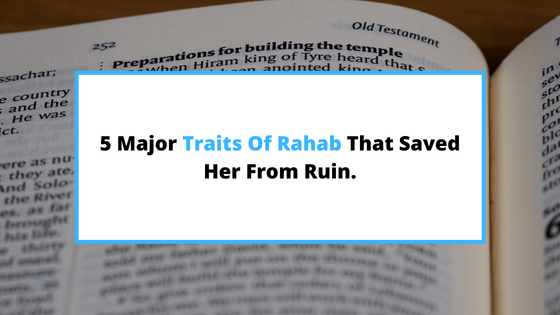 The story of Rahab, the harlot in the Old Testament is one of the fascinating stories of salvation and redemption, which clearly shows how God can redeem anyone regardless of their sinfulness as long as they fully give themselves to Him.

In this post, we will look at the 5 major characteristics of Rahab that made her an interesting bible character worth mentioning in the old testament that ultimately made her to be saved and later alone become part of Jesus Christ’s bloodline.

As new testament believers, there is a lot we can learn from Rahab’s story in the bible where by faith she chose to save the spies that came to spy in her land.

With that said, let’s look at the 5 characteristics of Rahab in the bible that we new testament believers can learn from and how her story foreshadowed the redemption of our Lord Jesus Christ.

Who Was Rahab In The Bible?

Rahab is a figure in the Hebrew Bible, and the subject of the Book of Joshua. She is described as a prostitute and a harlot who assisted the spies sent by Moses to Jericho because she did not know that they were spies. She was spared of death because of her faith in God.

Her story is told in the book Joshua 2:1-21. The story begins with the spies sent by God to Jericho to spy out on the land. Joshua and Caleb were the only two spies who brought a good report and believed God would save them.

Rahab tells Joshua that she has heard that Israel is coming; however, she does not know their identity or their plans for conquest. She asks if they will come to her house and promised to save them from the king of Jericho by hiding the spies in her house.

Her story is a testimony of how God can use anyone despite their ugly past to accomplish His divine purpose. It also shows God can save and redeem anyone regardless of their sinfulness.

5 Major Traits Of Rahab That Saved Her.

Below are the 5 major traits of Rahab, a Canaanite woman, and prostitute who was unworthy of God’s grace and salvation that made her partake of God’s undeserved goodness.

One of the first characteristics Rahab had is that she was a woman of faith as we see in Joshua 2:9, which is why she said to the spies who came to her that she knew the Lord they served.

Due to this, she decided by faith to protect the spies by hiding them in her house. Due to her faith in the one true God of Israel the spies served, Rahab and her entire family were spared from sudden destruction.

Rahab’s story is a clear testimony that tells us that God can save anyone who willingly submits their life to Him regardless of their horrible sinful past.

Rahab ended up being a partaker of God’s grace, mercy, and goodness she didn’t deserve given that she was a harlot worthy of death at that time. Her decision to believe in the one true God of Israel the spies served changed everything for the better.

Another second trait we can see Rahab had is that she was fearless. Rahab knew that her decision to protect the spies as we see in Joshua 2:6 in the Old Testament could cost her life.

Despite this, she fearlessly chose by faith to protect the spies by hiding her in her home believing by faith that the God of Israel the spies served would somehow deliver her which happened to be the case.

The story of Rahab must be a challenge and encouragement to you as a New Testament believer to be fearless as well during times of uncertainty or even when your life is under threat.

Implying that you must not fear to serve the Lord in difficult circumstances or do the right thing even when that may cost your life as we see in the case of Rahab which is why we are told in Isaiah 41:10 that we must fear not but trust the Lord.

Rahab was also a courageous woman which is why she managed to hide the Israelite spies that came to spy on her land even when she know it might cost her life as we see in Joshua 2:6,7.

Her courage is what enables her to step up where it mattered the most and to change her destiny for herself and her family when she chose to save the spies by hiding them in her house.

If Rahab wasn’t courageous, she would have given away the position of the spies that came to her and possibly ruined her destiny. However, her courage at the time it mattered the most saved her from sudden destruction.

As a Christian, you are also called to have courage so that you can make the right choices in your life when it matters the most in the midst of uncertainty.

The fourth characteristic Rehab had is she was a woman of her word and kept her word of promising to protect the Israelite spies that came to her house, which she never broke like most would in her situation.

Being a woman of her word, made Rahab earned respect from Joshua despite being a Canaanite prostitute who eventually decided to save her and her entire family from destruction in Joshua 6:25.

If Rahab never kept her word of protecting the Israelite spies because of fear, she definitely wouldn’t have been spared along with her entire family and probably she wouldn’t even be part of the bloodline of Jesus Christ.

The faithfulness of Rahab in keeping her word even in hard times when her life was under threat must encourage you as a Christian today to be a person of your word and not a person who says one thing and does another.

Last but not least, we also see the Rahab chose to fear the one true God the Israelites’ spies served and represented as opposed to the earthly king of Jericho.

She chose to fear the God of Israel because she knew and realized that the God the spies served was a true and living one who was above every earthly king including the one from Jericho.

Her choice to fear the Lord rather than the earthly king caused Rahab to earn favor from the Lord thereby beginning her new journey and walking with the God of Israel from her life of being a prostitute.

I hope the above 5 characteristics of Rahab have helped you learn one or two things especially if you relate to her situation of being a prostitute.

Rahab’s story must be a reminder to every prostitute out there that God still loves you and can still use you for His glory despite your shameful past if you repent and come to Him.

In closing, if the above post was a blessing to you, share your thoughts below on how what you have just read related to you, and don’t forget to share before your leave. God bless. 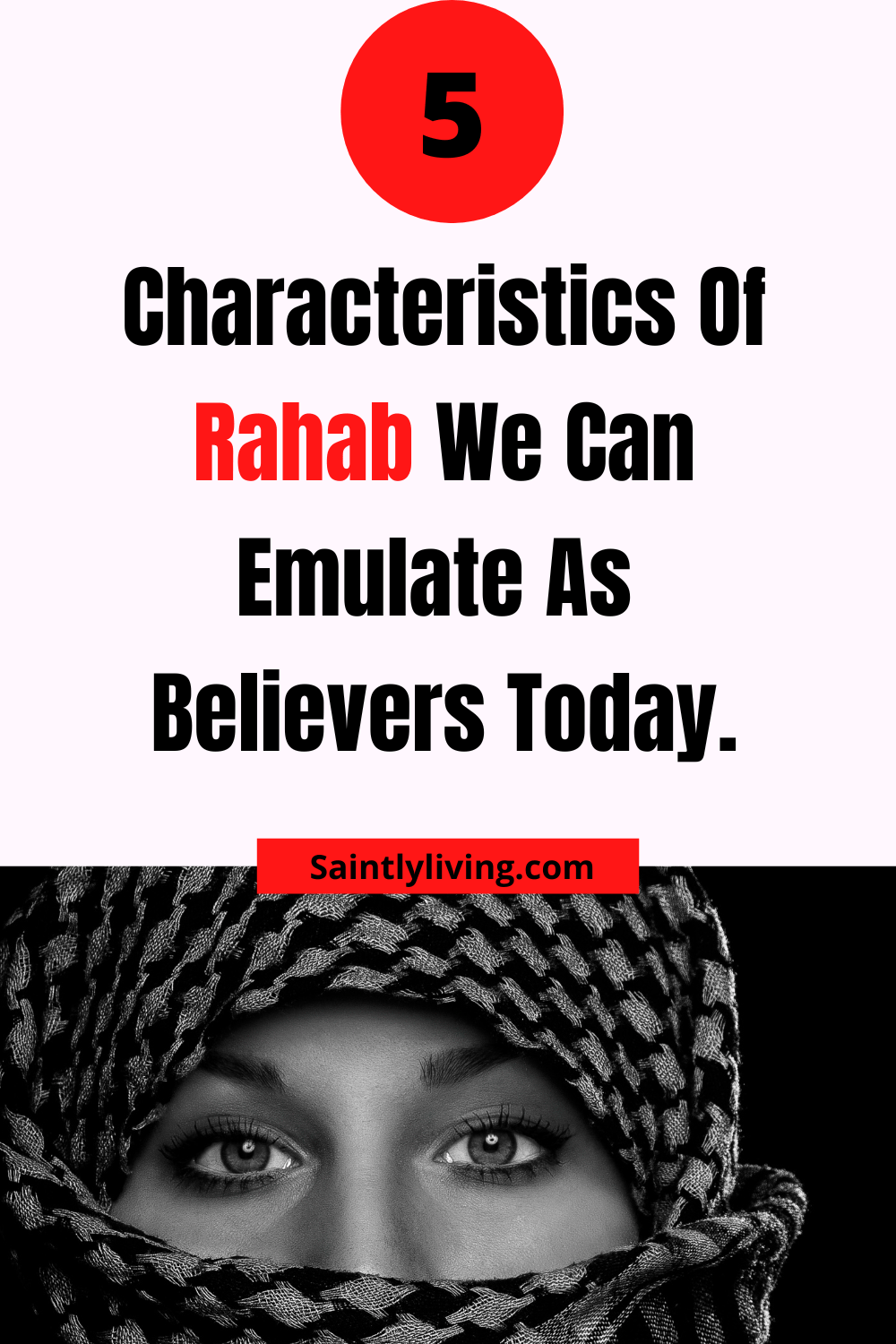