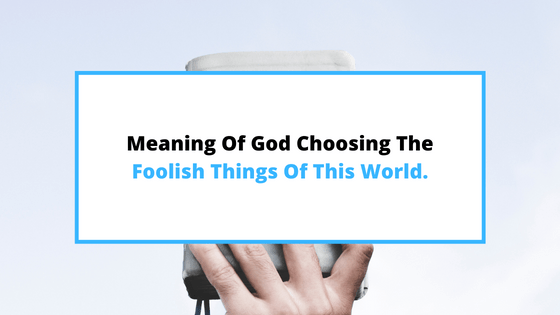 In this post today, we are going to briefly discuss the phrase,” God chooses the foolish things of this world to confound the wise,” that is found in 1 Corinthians 1:27. Below is a complete scripture of 1 Corinthians 1:27 (KJV).

The above phrase was said by the apostle Paul in the New Testament to believers in Corinth to remind them of the simplicity of the gospel of salvation and redemption of our Lord Jesus Christ.

He said that because most so-called learned and wise people of His time especially philosophers viewed that gospel of the cross that operates by faith as foolishness as it didn’t make sense to them.

Indeed, the gospel of the cross seems like foolishness to the so-called wise people of the world as it doesn’t make sense to them as they don’t have spiritual eyes or understanding to discern or make sense of it.

With that said, let’s look at what God chooses the foolish things of this world to confound the wise statement that 1 Corinthians 1:27 means. Let’s dive in.

How God Confounds The Wise?

Indeed, God will always use the simple and foolish things of this world to confound the human wisdom or worldly wisdom of the wise people of this world.

This is why God’s word tells us in 1 Corinthians 3:19 that the human wisdom of this world is foolishness to God as it’s flawed, incomplete, and imperfect.

For example, many atheists believe that there is no God when God’s creation and the universe prove otherwise. This simple bible wisdom of God creating the world in 6 literal days seems to confuse and baffle the scientists and atheists of this world.

To them, it doesn’t make sense that God can create this world in 6 literal days as outlined in Genesis 1:1-31. Instead, they believe that we came here by accident via the big bang and that God never created this world.

These people with their foolish wisdom undermine God’s infinite power and that He can do anything, which includes creating the world out of nothing in 6 literal days that these people seem not to grasp.

This simple truth of God’s creation baffles these atheists who endless ask for proof that God exists when the proof is all around for them to see with their own two eyes. What a shame!

The above truth is just one of the many examples of God using the simple things of this world to confound the human wisdom of the so-called wise people of this world who are foolish without even knowing it.

In both the Old Testament and the New Testament, we see countless examples of God using people in the world count as nothing to bring down the things that this world considers mighty and unbeatable.

One such example of God using the weak things of this world to bring down the mighty is in the story of David and Goliath found in 1 Samuel 17:1-58 found in the old testament.

In the above story, we see that David was able to defeat the mighty Goliath that the philistines considered undefeatable with just a stone.

If you read further, when Goliath and the philistines saw David, they looked down on him and scorned him with disdain due to his short stature but David encourage himself in the Lord (1 Samuel 17:41-45).

To the philistines and Goliath, there was no way a simple and short man like David could defeat them but they didn’t realize that David had a secret which was the Lord on His side.

When the battle ensued, David just got a stone and catapulted it with his catapult straight to Goliath’s head. Lo and behold the once and might Goliath all thought couldn’t be defeated fell before them all and died.

Upon seeing this, the philistines fled for their lives in different directions (1 Samuel 17:51). That my dear is how God uses weak things that this world looks down upon to bring down the mighty things of this world.

The Simplicity Of The Cross.

The simplicity of the cross is one of the simple and weak things God hath chosen to bring the wisdom of the wise to nothing.

To the world, the gospel of salvation and Jesus Christ dying on the cross for our sin so that we can be saved from sin and the consequences it brings don’t seem to make sense to the people of the world.

This is why 1 Corinthians 1:18 tells us that the Gospel of salvation is foolishness to the people of the world who are perishing as they have been blinded by the god of this world whose no other than Satan lest they hear the gospel of light and get saved.

Christ dying on the cross and the saving grace the cross brings to us believers who have chosen to believe in Him is seen as weakness and foolishness to the world.

These people fail to understand that God’s plan of salvation is so simple and straightforward that the learned and the wise people of this world fail to grasp the simplicity of God’s redemption of fallen man through His Son, Jesus Christ.

This simple truth has puzzled a lot of so-called highly educated, philosophers or scholars of this world who often find themselves in endless foolish debates concerning this truth as such simple truth seems to not make sense to them.

God will always use what the world deems foolish to show the people of the world that their so-called wisdom isn’t what it claims to be and is nothing but foolishness in the end.

I hope the above post on God chooses the foolish things of this world to confound the wise has helped you understand that man’s wisdom is nothing but foolishness to God.

May what you have read above by God’s grace help you accept the simplicity of the cross and receive the simple wisdom of God found in His word that lasts for all eternity.

In closing, if this post has edified you to embrace the simplicity of God’s wisdom found in His word, let me know in the comments below, and don’t forget to share before you leave.