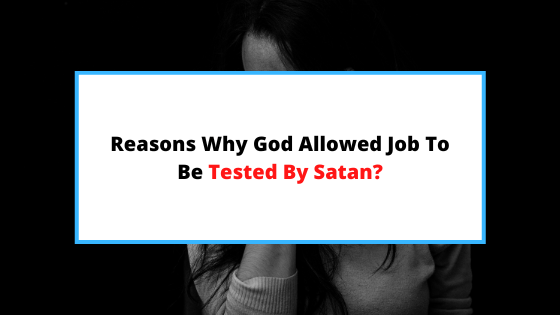 There are many reasons why God allowed Job to be tested. I am sure that you are familiar with the suffering of Job mentioned in the book of Job in the Old Testament.

The book of Job tells us that Job was a righteous man who lived in the land of Uz that feared God and eschewed evil all the days of his life.

But if Job was righteous and doing all that the Lord expected him to do, why would He then allow the untold suffering in his life we read about in the book of Job 1:21 and the second chapter of Job.

To many people and Christians, it doesn’t make sense and makes them think that God was unfair to Job for allowing all the suffering, bad things, and evil he went through despite being faithful to Him.

You need to understand that we can’t always understand why God allows certain things in our lives as we don’t have perfect understanding nor are we all knowing. I am sure Job also wondered about the same thing as he suffered.

This article today will look at some of the reasons why God allowed Job to be tested so that we can learn great lessons from the faith Job had in God despite his suffering.

Why God Allowed Job To Be Tested?

God allowed Job to be tested for several reasons. One reason was so that Job would learn about his own weaknesses and learn to rely on God more.

One of Job’s weaknesses that were exposed when he was tested was the fear of losing everything he had, which is why he said in Job 3:25 that what he feared most has come upon him.

Secondly, God allowed Job to be tested so that Job might be a witness against his friends when they came to falsely accuse him of sinning and blaspheming God as we see in Job 2:11-32.

God knew that Job would prove himself blameless, and He wanted to use him as a witness against Satan’s accusations against Him by showing that He still loved Job even though he had suffered greatly.

Furthermore, God allowed Job to suffer so that He could show Satan that humans can still be faithful to Him even after losing everything they have.

God also wanted Satan to realize that he was not going to win this battle against God’s people, so he gave Satan permission to continue testing them for as long as he wanted by giving him permission over their lives (Job 1:12).

God’s Love In Our Suffering.

Additionally, God allowed suffering in Job’s life to show Job that he still loved him and had not abandoned him in any way. Even though Job had suffered so much, God still wanted to reveal His power through this man’s life.

God also allowed Job to experience pain and suffering to test and perfect his faith, which would otherwise be impossible if everything went well all his life all the time.

You need to understand that your faith can only be proved to be real and refined in times of trials. The fact that Job didn’t give up on God when he experienced suffering showed that his faith was genuine and not fake.

If it was for many so-called Christians of nowadays, that would have spelled the end of their Christian journey and would have resorted to bitterness against God by asking questions like, “If God loves me, why would He allow all this evil, pain, and suffering in my life?”

In fact, many Christians today wonder if God loves them if they are experiencing suffering in their lives and the question to that answer is yes He does.

Just because you are experiencing suffering doesn’t mean that God has deserted you. He’s allowing suffering to test and refine your faith as well as to teach you a lot about yourself and His faithfulness.

Job did not doubt that God loved him despite all his suffering even when at one point he asked God why he had to suffer the way he did.

But as we see throughout the book of Job, God still loves us as He demonstrated to Job when we experience suffering even if we may not understand why God allows us to suffer greatly at times.

Remember, it’s not for you to question God why He allows certain things in your life because even if He told you now, it would not make sense to you as you don’t have the perfect understanding God has.

All you need to know is that all things will work out for your own good in the end be it the pain and suffering you are going through in you love Him and are called according to His purpose as Romans 8:28 tells us in the new testament.

Why God Allows Us To Be Tested?

God allows us to be tested because he wants us to trust Him. To trust God, we must have faith in him and his word. Job was a man of great faith in God.

He did not doubt that God would restore all that he had lost. God allows us to be tested so we will be humble and not boastful about our faith or good works.

Job’s friends were believers but they did not have the same kind of faith as Job did; they were not as humble and did not trust God as much as Job did.

They lacked patience and understanding when it came to Job’s suffering, which caused them to question God’s mercy and justice on earth.

God allows us to be tested so we will see how weak we are without him and realize how much we need him in our lives (see James 4:14). Job saw this when all his possessions were taken away from him but still trusted in God’s goodness.

To add to the above, God allows us to be tested because he wants to see if we will remain faithful to Him even when things go wrong in life as true faithfulness can only be proven during hard times.

He wants us to demonstrate our faithfulness by continuing to serve him with all of our hearts and soul during those times. God also tests us so that He can conform us to His Son, Jesus Christ in character.

God allowed Job to suffer because he knew that Job would remain faithful and not curse him as most would do in his situation despite all of the terrible things that happened in his life.

Related: If God Loves Us Why Do We Suffer? [+Sermon].

Why Did God Let Job Suffer?

Job was a man who was faithful to God. He was a good man and loved God very much. But God allowed Satan to attack and afflict Job’s life to test his faithfulness.

Job lost everything that he had in this world in a short period but God blessed him with more than he ever had before. Job’s story shows us that God is faithful even when we don’t understand why He allows us to suffer.

He was rich and prosperous but he did not trust in his wealth or his own strength but only in God’s power though he feared losing them at some point (Job 1:21).

The book of Job begins with an account of how God tested him by allowing Satan to attack his life by taking away all that he had worked so hard for (Job 1:12-22).

This happened because God wanted to see if Job would still trust Him while suffering such a great loss. Though Job lost everything he had, he remained faithful to God throughout his suffering (Job 2:3).

Because of this, God eventually restored everything Job had lost twofold as we see in Job 42:10-17. He had twice he had before and was blessed with beautiful daughters who were more beautiful than those he lost earlier.

In the same way, the Lord will restore and bless you tenfold than what you had earlier if you prove your faithfulness to Him when it matters most i.e. during times of trials, loss, and hardships where most fail and quit their Christian faith.

The above post has shown you the major reasons why God allowed Job to be tested and I hope you will find great comfort and hope knowing that God is still faithful even in your suffering and that everything will work out for your own good in the end if you remain faithful the way Job did. Stay blessed and don’t forget to share before you leave.