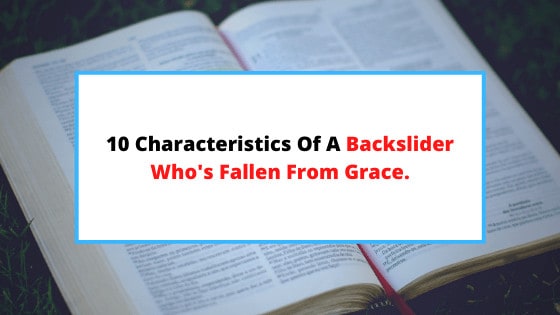 There are many characteristics of a backslider or backslidden Christian who has abandoned their Christian faith that will manifest if someone turns their backs on God.

And this post will look at the 10 major characteristics that a backslidden Christian or believer will exhibit in their life that are found in the bible.

Without wasting much of your time, let’s look at the 10 major characteristics of a backslider that a backslidden Christian will show if they have fallen from grace.

10 Characteristics Of A Backslidden Christian.

Below are the 10 major characteristics of a backslidden Christian who has abandoned their Christian faith will manifest in their life.

Having a hardened heart towards God and His word is one of the major characteristics of a backslider who has fallen from grace you will instantly notice due to the absence of the Holy Spirit in such people that makes one humble and gentle.

A person who has backslid doesn’t want anything to do with the Lord and anything concerning Him because of a different spirit that has entered such people.

This is why backsliders are usually stubborn and difficult to correct and if you try to correct them, they will try to justify themselves as to why they have fallen due to the sin that has hardened their hearts which Hebrews 3:13 warns us about.

2. No Interest In God Anymore.

A backslidden Christian who has fallen away from grace and has abandoned their Christian faith will no longer be interested in the things of God or reading God’s word anymore which will be boring and uninteresting at this point.

Instead, the world and the things that are in this world will now be more appealing and attractive once again which is why such people if they were going to church regularly, that will no longer be the case.

However, going to parties, clubbing and otherworldly events that please the flesh will be appealing to a backslidden Christian. In short, backsliders will become pleasure loves once again as 2 Timothy 3:2-4 talks about.

Backsliders are some of the most self-absorbed and self-centred people you will ever come across in your life which is why you can’t tell them anything.

A self-absorbed person will only think about themselves and not others which will be reflected in their actions and deeds towards other people.

This is why correcting a backslidden believer is quite challenging as they are self-absorbed in their ideas and sinful ways which in their own eyes seems right as Proverbs 14:14 wonderfully sums it up concerning such people.

4. Filled With Their Own Ways.

We are told in Proverbs 14:14 that a backslider in heart is filled with their own ways and have no interest in doing things the Lord’s way due to the self-will which is active in such people.

And this can be seen in the way such people live. Someone who is filled in their own ways isn’t willing to submit to the will and ways of God which they find ridiculous and burdensome to follow.

This is why a backslidden Christian cannot be a disciple of our Lord Jesus Christ as being Christ’s disciple requires you to deny yourself to follow Him which can’t be the case if you have backslid and are filled with your own ways in your heart coming from your sinful fallen self.

Living in secret unconfessed sin is probably one of the major causes of why many believers backslide and fall back into sin over and over again.

If you have any secret sin in your Christian life you are hiding from everyone just know that your backsliding process has begun. You must remember that if you cover your sins as Provers 28:13 wonderfully puts it, you won’t progress.

And that secret sin you are hiding will soon catch up with you and manifest in front of everyone in due time and by that time, you have had completely backslidden and forsaken your Christian faith altogether.

1 john 2:15-17 in the new testament warns every believer in the Lord Jesus Christ who Himself isn’t of this world not to live the world nor the things that are therein lest they depart from the Lord.

And it’s just a matter of time before you completely forsake the Lord Jesus Christ for this present evil world just as Demas did in 2 Timothy 4:10 who left the apostle Paul for the world and many believers today who were once strong in the Lord have just done that.

See Also: 11 Signs Of Worldliness [That Show If One Is Worldly].

Being haters of God is also one of the major Characteristics of a backslider as Paul wonderfully puts it in Romans 1:30 which is why they want nothing to do with Him.

People who are haters of God hate the way of righteousness but take pleasure in their evil ways due to the love of sin present in the hearts of such people.

Unbelief is now what rule the lives of people who have backslid into sin and the world. You will also hear these people now mocking the Christian faith they once upheld wholeheartedly.

Backsliders are also full of pride and are have a haughty spirit ruling their lives which is why you can’t correct them of their evil and sinful ways without them justifying themselves.

They do what is right in their own eyes and don’t want anything to do with holiness. Unfortunately for such people, Proverbs 16:18 warns that destruction will soon come their way if they continue in that state of pride.

So, if you don’t want destruction to come upon your soul, get rid of any pride hindering you from asking for forgiveness from our Lord Jesus Christ to forgive you of your backslidings.

A backslider or backslidden Christian who has fallen from the grace and is back into sin and the world will no longer be interested in going to church anymore which they will find boring at this time.

If such people used to go to church or attend Bible study weekly, this will no longer be the case as they will be hardly going to church at this time which they think is a waste of time to them.

The love of pleasure as Paul wonderfully puts it in 2 Timothy 3:2-4 is what will now be in the heart of a backslider or a believer who has turned away from our Lord Jesus Christ and gone back into the world and sin.

Last but not least a backslidden Christian will no longer be interested in living a life of holiness and righteousness they once upheld in their Christian life.

And since they have abandoned their Christian faith, living a life of holiness and righteousness will no longer be appealing to a person or believer who has gone back to the world.

If you have backslid, you must remember that without holiness as Hebrews 12:14 says, you won’t enter heaven. So the best you can do if you have gene back into sin is just return to the Lord Jesus Christ in repentance before it’s too late.

See Also: 10 Major Reasons Why Is It Difficult To Live A Holy Life.

I hope the above 10 characteristics of a backslider will now help you know whether you are a backslidden Christian or not so that you can return to Christ Jesus if needed. In closing, if you found this post deifying, kindly let me know in the comments below along with any questions you might have on what you have read. Stay blessed and don’t forget to share.

2 thoughts on “10 Characteristics Of A Backslider [Fallen From Grace]”