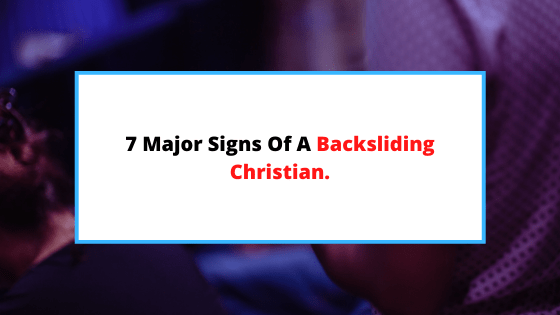 Have you ever backslidden in your Christian walk or lost your salvation? You’re not alone. Many Christians have gone through a season of falling away from God and rejecting His ways.

So what are the signs of backsliding in a backslider or a fellow believer who’s in a process of falling away that we should look out for? This is what this article will address today.

And if you are wondering what the signs of backsliding are, don’t despair as I will list the 7 signs that will you that you are a backslidden Christian so that you can be restored before it’s too late.

What Is Backsliding In The Bible?

According to the bible, backsliding is simply turning away from the Lord Jesus Christ or the truth and going back into the world and sin you once forsook.

In short, backsliding is simply forsaking the way of righteousness you vowed to uphold and returning to your old sinful ways due to one reason or the other.

You must remember that backsliding begins in the heart of a person and physically manifests outwards later on such as pride, going back into sin, worldliness and so on.

7 Major Signs Of A Backsliding Christian.

Below are the 7 signs of a backsliding Christian that will show if they have fallen from the grace and gone back into sin and the world.

A declining prayer life is one of the earliest signs that will show if you are a backsliding Christian and it’s what precedes completely backsliding and falling away from grace or one’s Christian faith.

Most of the backsliders if you ask them why they backslid will confess to you that lack of a strong prayer life is one of the causes as to why they fell back into sin or went back to the world.

This is why Paul in 1 Thessalonians 5:17 tells us to pray without ceasing because the devil our adversary who’s like a roaring lion seeking whom hem devour hasn’t given up on you.

2. Loss Of Interest For The Church.

The loss of interest in church activities or going to church thereof will also be among the signs of backsliding that will manifest in a backsliding Christian who is slowly falling away from the Lord Jesus Christ and their Christian faith.

If you backslide, you are going to lose interest in going to church as you will see it as a waste of time and you will rather go to party or watch sports rather than go to church which now you will find less interesting to be in.

Many Christians who were once on fire for the Lord Jesus Christ have backslidden this way which started with casually not regularly attending church service to no longer going to church altogether.

We are told in Hebrews 10:25 that we must not forsake the assembling of together as believers as it helps edify the body of Christ but if you are a backslider, that won’t matter to you as you won’t even want to be in the company of other believers.

Another sign that will show that someone has backslid or is backsliding is the love of the world and the things of this world 1 John 2:15 warns about.

The love of this present evil world and the mundane things that are in it is one of the major causes as to why many believers who were once strong in the Lord have backslid and gone back to the world.

To these people, the world and the things that are therein are simply too attractive to even try to resist or live without them. This is why there are so many worldly Christians in churches today.

One thing you need to know is that you can’t be a true believer and be a friend of this world which is enmity with God as James 4:4 wonderfully puts it.

Many people who thought were Christians serving our Lord Jesus Christ will not enter heaven because of the worldliness or love of this world which was in their hearts as worldliness is a heart issue. So if you don’t want to miss heaven, have nothing to do with this present evil world.

See Also: 11 Signs Of Worldliness [That Show If One Is Worldly].

Sin is the primary cause of backsliding in the life of any backsliding Christian as sin alienates you from God which is a huge issue even among many believers today.

Many Christians who have backslid if you ask them will tell you that they were living in secret sin be its sexual immorality, drunkenness and so on that no one was aware of at that time before they fell from grace.

This is why Hebrews 3:13 warns that you must not let your heart get hardened by the deceitfulness of sin which precedes total backsliding or fallout from the grace.

All the ex-Christians you see who have left their Christian faith and are now living in sin they once forsook backslid because of one sin or the other they let into their life due to carelessness and gross negligence on their part.

If you are still living in sin secretly, you need to stop doing so before you completely fall away from the grace and go into apostasy which is a very dangerous condition any backslider can be in.

One of the first signs of backsliding is being self-centred. A backsliding Christian becomes less reliant on God and more reliant on himself or herself.

A Christian who has backslidden and fallen from the grace becomes focused on his or her interests, ambitions and goals, instead of God’s plan, will and purpose for their life.

This is why backsliders are so full of themselves and couldn’t care less about doing what pleases the Lord as long as their sinful self is gratified.

The bible in Philippians 2:3 tells us that we must not do anything is strife or conceit but we must always think of others and esteem others better than ourselves.

But if you have fallen from grace and backslid, that will no longer be the case as a spirit of self-centeredness will now be in full charge of your life that will make you only think about yourself and not your fellow believers in Christ.

Having no time for God but with the things of this world sinners do other than God is among the common signs of backsliding that a backslidden Christian will manifest in their life.

The backslidden Christian will no longer spend time with God in prayer or reading His Word. He or she will be too busy pursuing worldly things such as a career, money and family.

He or she may also be involved in activities that please themselves but not the eternal things of God such as watching movies or playing computer games the whole day. These people are also pleasure lovers 2 Timothy 3:2-4 talks about which is why God is of no interest to these people.

But when it comes to the things of God, it’s another story and they will come up with all sorts of meaningless excuses saying that they are too busy for God

These same people can spend countless time on social media or T.V posting or watching useless things that won’t even help them to grow spiritually or draw them closer to the Lord.

Last but not least, compromise is the first thing that will show if someone has backslid or is in the gradual process of backsliding which already began in the heart.

Compromise in one’s Christian life begins when one starts going against their previous godly standards of the bible they vowed to follow when they got saved due to one reason or the other.

For example, you may have decided when you got saved that you will no longer dress like the world but after some time, you decide against that decision not to dress like the people of the world which means you have compromised your stance on worldliness.

Compromising can also extend to no longer being willing to endure the sound doctrine of the bible concerning holiness as 2 Timothy 4:3 says you once upheld strongly in your heart and to going back to false teachings which don’t talk about sin or holy living.

And many Christians have compromised and backslidden this way as they thought what they were compromising on be it Christian dressing was not a big deal until it became so.

If you ever find yourself worried that you might be backsliding, take a step back and ask yourself these questions. If you’re able to identify at least three of the tell-tale signs of a backsliding Christian I have mentioned above, then chances are there are some things you need to work on. But don’t get discouraged! With God, anything is possible. Stay blessed and don’t forget to share. 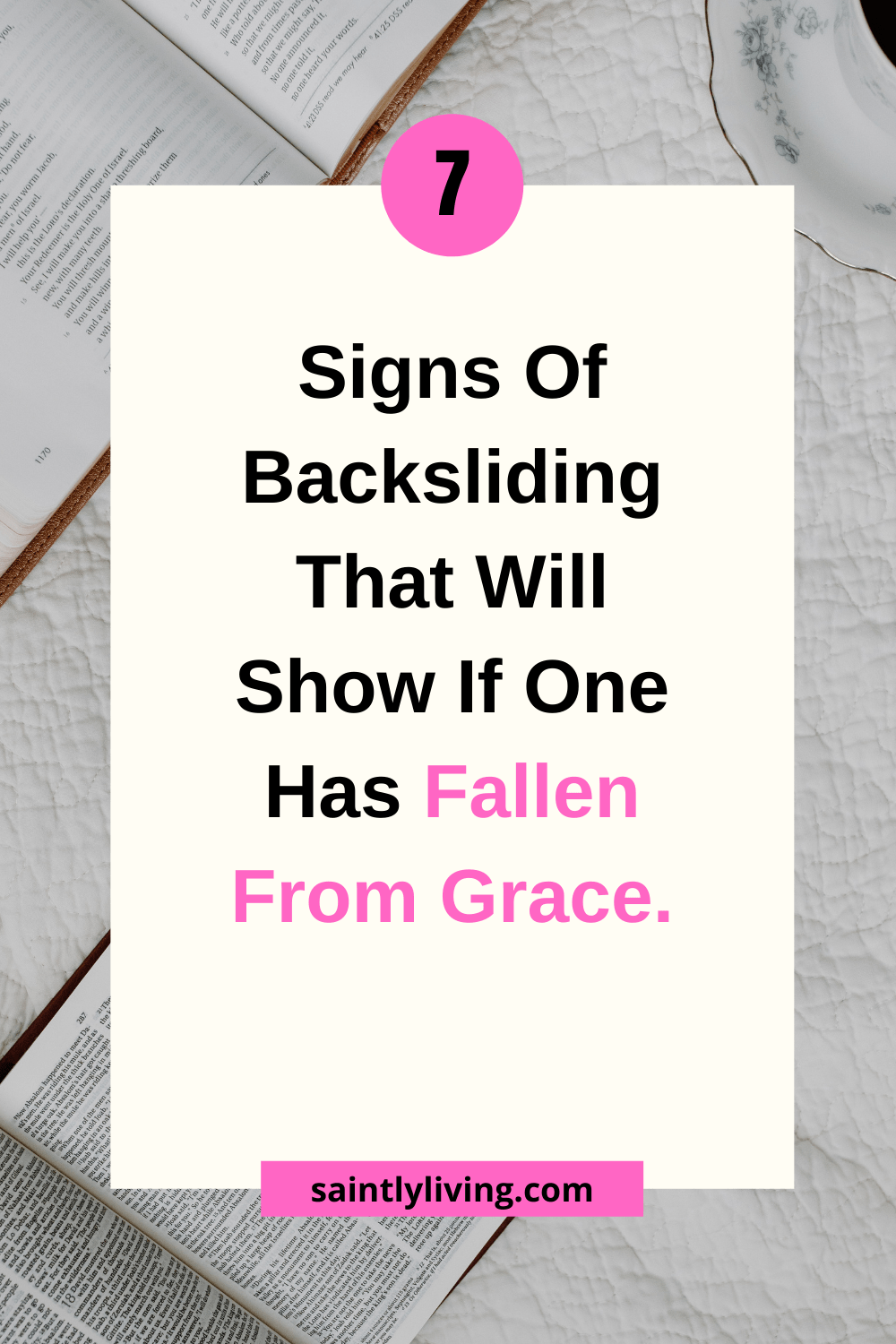