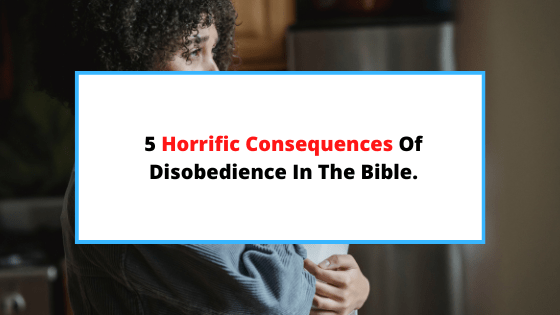 Since the inception of this world, God has always punished disobedience to His word or commands which is why our first parents were not spared when they sinned.

In fact, all the disobedience we naturally have against God is due to the fall of our first parents Adam and Eve who were the first to disobey God and suffered the consequences for that.

The consequences of disobeying God can be seen throughout the Old Testament and the New Testament as we will see as we continue our discussion on this topic.

So, if you are a disobedient person who disobeys God and does evil, you will face the consequences of your disobedience sooner or later.

With that said, let’s look at the 5 major consequences of disobedience in the bible that come when you disobey God’s word or commandments.

What Is Disobedience? Biblical Definition.

The simple definition of disobedience is simply going against what God has commanded in His word or not obeying what God tells us to do.

When we disobey God, we go against His commandments or the teachings of our Lord Jesus Christ He taught when He was on earth in the New Testament.

Disobedience is what makes us stubborn and rebellious against God and this is due to our fallen sinful nature we inherited from our first parents who first disobeyed God in the Garden of Eden.

Why Is Disobedience A Sin?

Secondly, disobedience is a sin because it shows rebellion and is caused when you don’t trust God or do not want anything to do with Him.

We are all disobedient by birth because of our first parents who fell in the Garden of Eden by eating the forbidden fruit, the first act of disobedient man committed against God.

God views disobedience as sinful because it portrays Satan’s character and nature in your life from where disobedience and rebellion all started and came.

You need to remember that God expects obedience from all His children to whatever He commands and if we love God, we will obey Him.

Related: 7 Major Characteristics of Sin That Make Us Do Bad Things.

Below are the 5 major consequences of disobeying God’s word to remind you that disobedience to God is never a good idea and only attracts punishment and judgment.

One of the major consequences of disobeying God is that it attracts God’s punishment on an individual because God has promised in Leviticus 26:14 that disobedience will always be punished.

The punishment that comes when you disobey God can clearly be seen in the Old Testament in the case of the children of Israel who were punished by God when they disobeyed Him as we see in Jeremiah 30:1-24.

In the Old Testament, we can see that God sent various punishments in the form of pestilences, diseases, defeat by the enemy, affliction, etc. to the Israelites when they disobeyed God’s word.

The Lord of hosts will punish you as well as He did to the people of the old if you don’t repent of your disobedience or evil ways despite several warnings from Him.

And the punishments you may receive by being disobedient can range from diseases, things not going well in your life, afflictions, misfortunes, and ultimately hellfire if you die unrepentant.

The other consequence that comes when you disobey God is that you attract God’s judgment upon your life for being a rebellious and disobedient child.

One thing you need to know is that disobedience always brings wrath and judgment upon a person’s life especially if that person continues to live in willful disobedience.

As a proof of this, we can already see in the Old Testament in the case of the Israelites where God rained down many judgments on them because of disobeying Him as we see in 1 Chronicles 21:14 onwards.

The children of Israel are a nice case study and example that helps us to know that God always brings judgment on anyone be it a king or an ordinary person which can be in the form of death if such people don’t repent.

Ultimately, the worst judgment that will come upon all the disobedient is that final judgment and eternal damnation in the lake of fire that was prepared for the devil and his angels as the Lord Jesus Christ tells us in Matthews 25:41.

Related: How To Escape God’s Judgment & Wrath (In 3 Simple Steps).

In the New Testament, the apostle Paul tells us in Romans 1:18-32 that God’s anger or wrath is revealed against all forms of disobedience, ungodliness, unrighteousness, and the people who suppress the truth in their wickedness and disobedience.

From the above verse, we can see that being disobedient to God’s word always attracts God’s anger on anyone who disobeys Him by continuing to be stubborn in sin.

We can see this happen in the case of the children of Israel in Judges 2:20 where the anger of the Lord was kindled against Israel for their disobedience, which caused God to deliver them to the hands of their enemies, the philistines.

Kind David the psalmist further reminds us in Psalms 7:10-12 that God is angry with the wicked daily, especially those who live in willful disobedience to His word and commandments written in the bible.

So, if you are living a disobedient lifestyle of sin, just know the Lord is angry with you and you better repent today and ask for forgiveness before His wrath consumes you when your time runs out, dear.

4. Disobedience Damns You In Hell.

The bible tells us that all the disobedience will finally be cast into hell fire where they will spend the rest of their eternity if they don’t repent.

We are told in Proverbs 11:21 that the disobedient and the wicked who join hands to do evil won’t go unpunished and that they will eventually have to reap the fruits of their disobedience in hell if they die in their rebellion.

Jesus Christ warned in Matthews 13:41 that everything that offends will be finally be cast in the fiery furnace of hell where the disobedient will be weeping and gnashing of teeth along with the devil and his fallen angels.

But if you don’t repent and death finally catches up with you, hell will be your final abode which will be a sad state of affairs indeed.

Related: 11 Consequences Of Sin (To Help Avoid Sin All Costs.)

Last but not least, disobedience hinders you from receiving God’s blessing in your life. Instead, the plagues and calamities God promised in Deuteronomy 28:15 to the Israelites will be upon them if they rebelled and will also be in their life if they live in willful disobedience.

Remember, the Lord can’t bless you if you want to have nothing to do with obeying His Word, and what He promised in Deuteronomy 28: 13,14 won’t apply in your life if you live a life that doesn’t please the Lord.

This is why we see that when the children of Israel disobeyed the Lord, they stopped enjoying that favor and blessing God promised them if they remained obedient to His word He commanded them to do.

No wonder you see that the Israelites in the Old Testament always defeated their enemies and enjoyed prosperity from the Lord as long as they remained obedient to God.

So, if you want to attract God’s blessing upon your life, live a life of obedience God expects you to live and all will be well with your soul, dear.

I hope the above 5 consequences of disobedience in the bible will now help you avoid living a life of disobedience as being disobedient to God brings nothing but calamities to your life. In closing, if this post edified you, let me know in the comments below, and don’t forget to share before you leave. Stay obedient and say no to disobedience. 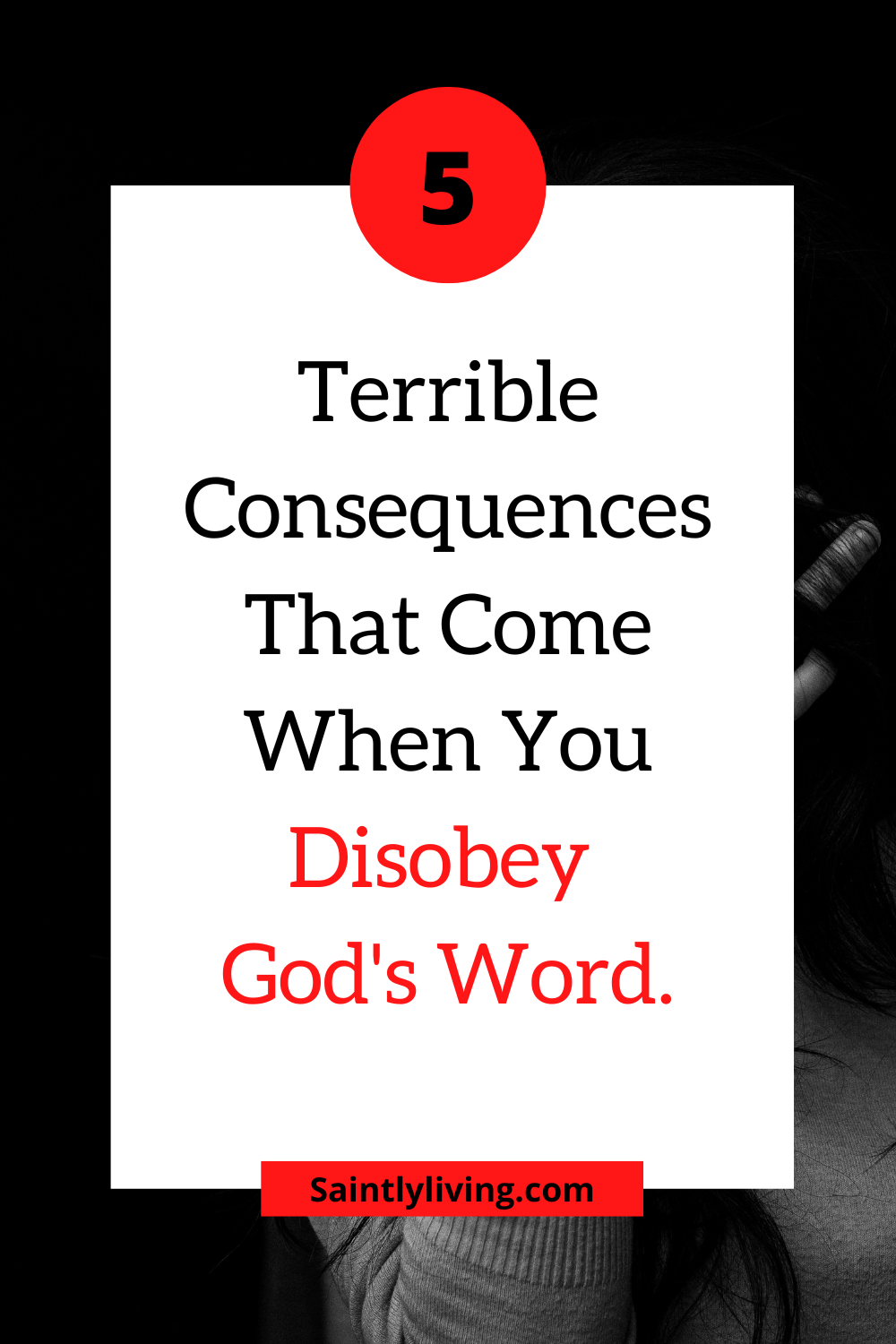