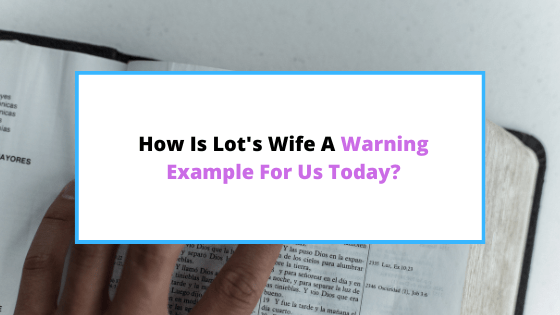 How is Lot’s wife a warning example for us today? I am sure you may have wondered about this very same question at one point in your Christian life.

And this is what this article will try to handle today. One of the major lessons we can learn from Lot’s wife is that it’s not always a good idea to look back.

The story of Lot’s wife begins in the book of Genesis in the old testament when the angels of the Lord warn Lot to flee Sodom and Gomorrah as the Lord was about to destroy it with fire and brimstone.

Due to the wickedness there that had become too much for even the Lord to bear, God had decided that He would destroy Sodom and Gomorrah but there was a catch.

The catch was that Lot, a righteous man, and his family resided there and God couldn’t destroy Lot and his family along with the wicked people of Sodom as Lot was righteous. Therefore, a plan had to be devised.

Lot Told To Escape Sodom With His Family.

Lot was also told by the two angels of the Lord that he must take his family out of Sodom before the destruction occurred. However, despite this warning from God, Lot still decided to stay in Sodom when he knew the destruction was coming (Genesis 19:16-19).

This prompted the angels of the Lord to drag Lot and his family hurriedly out of Sodom and told Lot and his family to flee to the plains. It’s at this point that they were instructed not to look back and this is where the story gets interesting.

Lot’s wife decided to look back at Sodom while they were fleeing and she turned into a pillar of salt. This is another example of how one’s sins can be punished quickly and without mercy, sometimes (Deuteronomy 32:22).

Having looked at the back story of Lot’s wife, let’s look at how is Lot’s wife a warning example for us today as believers of the impending destruction that awaits all those who draw back.

What Can We Learn From Lot’s Wife?

There is a lot we can learn from Lot’s wife who turned into a pillar of salt. One of the great lessons when can learn is that we must lot look back.

We also see that God will always punish disobedience at times in a very swift manner as we see in the case of Lot’s wife who instantly turned into a pillar of salt when she looked back.

From the story of Lot’s wife, we can also learn that it’s important to fully have faith and trust God fully by fully obeying what He tells us instead of doing things we just feel like.

Having said the above, let’s look at the 4 major lessons we can get from Lot’s wife in detail that will help us not to look back as well into perdition as Lot’s wife.

Below are the 5 major lessons from Lot’s wife that all believers need to take not in their Christian lives so that they don’t end up like her.

One of the major lessons we can get from Lot’s wife is that worldliness will always lead to backsliding which was the major reason why Lot’s wife looked back.

Lot’s wife looked back because her mind was still in Sodom and Gomorrah where she left the great wealth she had. It also seemed that Sodom had entered her heart as well.

This explains why when it started to rain fire and brimstone, she looked back to see how the things she left there were destroyed which made her become a pillar of salt.

As believers, we must not love the world or the things that are in this world as they will lead us to look back to the world and backslide in the end.

This is why the Lord Jesus Christ warns us in Luke 17:32 that we must remember Lot’s wife who turned back due to the worldliness of Sodom she had in her heart.

Related: How To Avoid Worldly Things [That Please The Flesh]

Another vital lesson we can learn from Lot’s wife’s predicament in Genesis 19:26 due to her disobedience is that God always punishes disobedience and that He isn’t a respecter of persons.

Lot’s wife would have avoided her predicament of turning into a pillar of salt if only she had heeded the simple instructions God gave them of not looking back.

However, the love of Sodom was still in Lot’s wife, which is why she found it hard not to look back as the cities of Sodom and Gomorrah were destroyed. Hence, she disobeyed and looked back and turned into a pillar of salt instantly.

God is giving us the same warning today that disobedience always brings judgment and punishment which is why as believers, we must not dare to look back to the old sinful lifestyle we chose to forsake and leave behind.

So, if you are living a disobedient Christian life, you better repent today before God’s judgment comes upon your life as God’s commandment of not looking back to the world in your Christian journey still remains today.

The warning of not looking back is in fact the most important key takeaway we can learn from Lot’s wife who looked back and turned into a pillar of salt.

As Christians, we must not dare to look back to the world nor should we look and drawback to the old sinful lifestyles we once forsook when we gave our lives to Jesus Christ.

God is still giving us the same warning He gave to Lot and his family of not looking back when He delivered them out of the destruction of Sodom and Gomorrah, which was full of all manner of moral perversions.

This is why Hebrews 10:39 tell us that we must not draw back the way Lot’s wife did as the Lord has no pleasure in one who draws back unto perdition.

Therefore, don’t look back and draw back to perdition like the way Lot’s wife did after being delivered from the wicked cities of Sodom and Gomorrah only to look back to turn into a pillar of salt.

Related: How To Stop Backsliding In 11 Simple Steps? [+ Sermon]

4. Destruction Awaits All Those Who Draw Back.

Last but not least, the other lesson we can get from Lot’s wife is that eternal judgment and destruction await all those who draw back to the sins of this world.

You need to understand that if you choose to backslide and drawback to the world by giving up your Christian faith, eternal destruction in hell awaits you if you don’t repent.

If you have drawn back, today is the day you can repent and return to God for mercy and forgiveness before it’s too late when you die.

Otherwise, if you remain in your backslidden state and you happen to die suddenly today, hell is where you will immediately find yourself which was prepared for the devil and his angels (Matthews 24:41).

So, if you don’t want to end up like Lot’s wife in hell, don’t backslide or draw back to perdition, no matter how hard things may be in your Christian life today as great will be your reward in heaven if you don’t give up and drawback to the world.

Related: 10 Dangers Of Backsliding [All Backsliders Needs To Know]

I hope the above post on how is Lot’s wife a warning example for us today as believers will help you avoid drawing back to perdition the way Lot’s wife did.

The above lessons from Lot’s wife are a lesson to all backsliders out there who have drawn back that destruction and judgment await them if they don’t seek restoration.

In closing, if this post has benefited you greatly, let me know in the comments below, and don’t forget to share before you leave. Stay steadfast and don’t draw back. 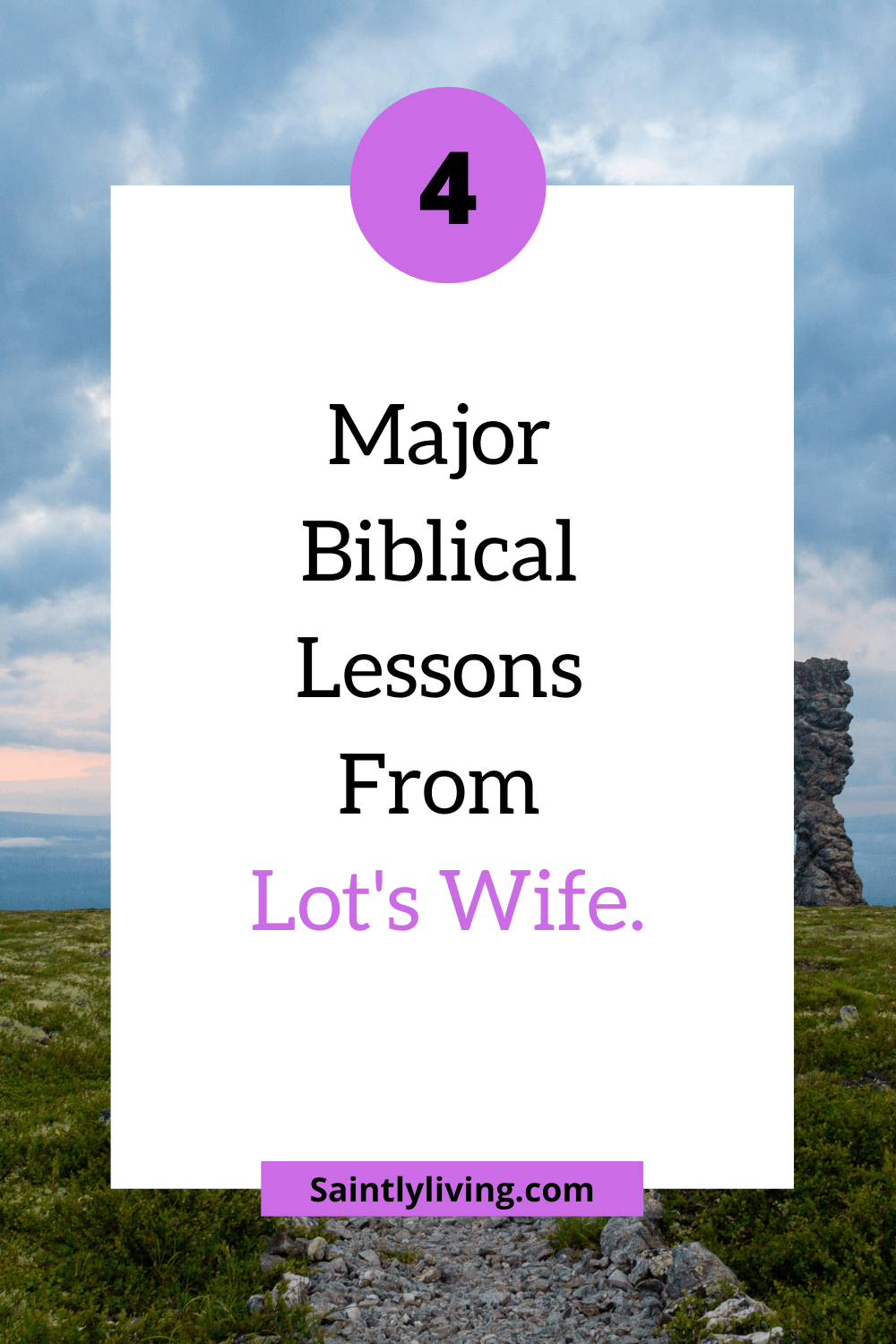