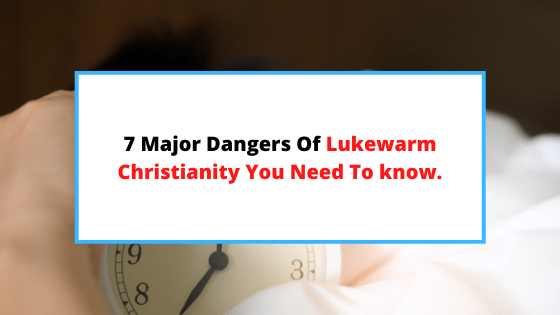 It’s no surprise that many believers today are becoming lukewarm in their faith especially in these last days we are living in without being aware of the impending dangers of doing so.

And this post will address the 7 major dangers of lukewarm Christianity that will wake you up and help to stop being lukewarm if you discover you have been so.

7 Dangers Of Being A Lukewarm Christian.

Backsliding doesn’t happen overnight which is one thing you must know dear as you are reading this. It slowly begins when one slowly begins to lose the commitment and fire they once had for God where compromise slowly sets in.

Since when you are lukewarm, you are no longer on fire for God due to the first love you lost for Him the one Jesus Christ talks about in Revelations 2:4.

And in this lukewarm condition, you become prone to backsliding because of the loss of interest in the things of the Lord at this point.

Many Christians are in this condition where they have lost the fire, faith, commitment and zeal they once had for God and the love of this world has now taken over their lives rendering them ineffective in God’s kingdom.

When you become lukewarm, you essentially have one foot in the world and one foot in God’s kingdom when never works at all because you can’t serve two masters at the same time (Matthews 6:24).

Soon, the love of this world will take over your life which will eventually lead to backsliding and this is how the once strong vibrant Christians have fallen away from their faith due to the simple lukewarmness they allowed in their Christian lives.

When you become a lukewarm believer, you become unfruitful in the kingdom of God because you are neither hot nor cold for Christ Jesus.

We can see this happen in the new testament in Revelations 3:15 where the Laodicean Christians in the church of Laodicea had become lukewarm and became neither hot nor cold which prompted Jesus Christ to rebuke them of their lukewarmness.

Remember, there is no such thing as a middle ground in the kingdom of our Lord Jesus Christ. You are either for Him or not. No such thing as spiritual neutrality my dear.

And this has been made worse by the number of lukewarm churches that have sprung up in these last days which don’t teach the truth. You can’t be on fire for God if you are attending a lukewarm church.

Many Christians today have become unfruitful in the kingdom of God due to the love of this world and the things that are in this world which has made the love of the Father in such people completely depart from them.

A lot of people who claim to be Christians today are no longer interested in going to church to serve the Lord but going to parties and sports functions have become more enjoyable and appealing to many people including professing Christians which is sad indeed.

One of the greatest dangers of lukewarm Christianity and lukewarm faith is that you will slowly become indifferent to God and things concerning Him.

Things of the Lord at this stage in your Christian life will no longer be interesting to you. Rather, you will find them boring and a waste of time and if you were going to church regularly, you will only be going to church occasionally when you become lukewarm.

And if you were an active soul winner or a singer in church, you will no longer do those things anymore and come up with meaningless excuses as to why you are no longer serving the Lord the way you used.

But the reality is that the love you once had for Jesus Christ and His ministry has waxed cold which is the case for many so-called American Christians today and elsewhere.

Jesus Christ warned in Matthews 24:12 that in the last days towards His return the love of many towards others and the things of the Lord will grow cold which will be manifested by the indifference they have developed towards the things of God.

Many people today have become indifferent to the things of the Lord. Attending bible study is no longer interesting to many lukewarm believers and will rather party during the time of bible study that will help them grow spiritually.

Going to church to listen to God’s word is no longer interesting to most people and if they go to church it’s just for formality but their hearts are completely far from God even if they are physically present in a church building.

One of the dangers of being lukewarm is that you will be in danger of losing your salvation and the eternal life that comes with it as you won’t take your salvation seriously at this point in your Christian life.

The reason for this is that when you become a lukewarm believer, you will no longer value your salvation and eternal life and treat them sacred.

And this will be as a result of you slowly allowing sin to enter your life because when you become lukewarm, you won’t see sinning once in a while as a big deal that can cost you your salvation.

And many Christians today are living such sinful lifestyles and thinking they can sin once in a while and be on their way to heaven but the thing is heaven can’t tolerate sin and such lukewarm people will be left behind when Christ returns if they don’t repent of their lukewarmness.

No wonder Paul in Hebrews 2:23,4 warns that how will we escape the wrath to come if you neglect our so great salvation due to our lukewarmness.

This is why you must avoid practising lukewarm Christianity and repent of it if you discover you have been practising it before it’s too late as no lukewarm believer will enter heaven.

Perhaps this is the greatest danger of being a lukewarm Christian that every lukewarm believer in a lukewarm church must fear and be terrified about.

If you continue in your spiritual condition of lukewarmness, you will risk being rejected by Christ Jesus when all is said and done which is why He said in Matthews 7:21 that no everyone who calls Him Lord, Lord will enter heaven.

And this will be the most tragic thing that will ever happen to you dear when you live this troublesome wicked world on your dying day.

This is the reason why Jesus Christ had to warn the Laodicean Christians of the church of Laodicea in Revelations 3:15 that He will eventually spew them out of His mouth if they continued in their lukewarmness.

So, if you don’t want our Lord Jesus Christ to reject you in the end due to your lukewarmness, stop being lukewarm and repent from it and ask Christ to restore the first love you had for Him if you have lost it and He will do that right now.

Remember, practising vain and empty religion that has no love for the righteousness of Christ in it won’t take you to heaven as vain religion has nothing to do with Christ.

Only true believers who truly love Jesus Christ with all their hearts and are dressed in His righteousness will eventually make it for heaven and I pray you will be among that number because if you are not, you will be very unfortunate, dear.

6. Makes You Have A Form Of Godliness.

When you become a lukewarm believer who practices lukewarm Christianity full of empty religion but without the life of Christ, you will only have superficial godliness which can’t make you enter heaven.

There are many Christians today who only have a form of godliness on the outside but are in reality far from God. They only profess to love the Lord with their lips but deny Him in their deeds (Titus 1:16).

One of the forms of godliness you will not in a lukewarm person who isn’t a true Christian is that they will be super religious on Sunday and dress like sons and daughters of Zion.

They will even sing like angels in the choir but after that when you meet them on Monday, they are worse than the heathens themselves who don’t even go to church or practise any religion of any kind.

And Paul warns in 2 Timothy 3:5 that in the last days, the will be many such superficial lukewarm Christians who will only have a form of godliness on the outside but will deny its power thereof that will be shown by the sinful lifestyle they are living.

He further states that if you are a true Christian who is filled with the Holy Spirit, you must turn away from such people lest they negatively influence you to believe them as well in their spiritual lukewarmness.

If you continue in your lukewarmness and enjoy sin on the side, Christ will eventually have to reject you at the end of time when all is said and done.

No wonder Jesus Christ said in Matthews 10:33 that if you deny Him in your lukewarmness now by being on the fence concerning Him before men, He will also deny you before His holy angels and His Father who’s in heaven.

And the end result of this is eternal damnation in hellfire which was prepared for the devil and his angels where you will spend the rest of your eternity with no hope of ever getting out (Matthews 25:46).

So, to all lukewarm people who have become lukewarm in your Christian life out there if you are reading this right now, you need to repent of your lukewarm faith before Christ rejects you.

One thing you must know is that no lukewarm believer will enter heaven and if you think you can be lukewarm and sin here and there thinking you will go to heaven; you are greatly mistaken, my dear.

This is why I encourage you to stop being lukewarm and return to the Lord for restoration if you have lost the first love you had for God. I was such a person as well but the Lord in His infinite mercy and grace has restored me.

Must Read: How To Escape God’s Judgment & Wrath (In 3 Simple Steps)

I hope the above 7 dangers of lukewarm Christianity will now help you stop being a lukewarm believer before it’s too late.

In closing, if you found this post useful, kindly share it with others who you know have lost their first love for God so that they can be restored before it’s too late. Stay blessed.