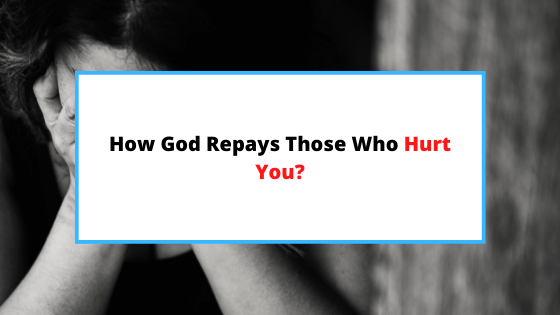 The question of how God will repay those who hurt you is a common question most Christians who have been hurt in one way or the other ask.

I am sure you as well may be asking this very same question if evil people for no apparent reason have hurt you terribly.

Many Christians, sadly, want to seek revenge if someone has hurt them but this isn’t the right response Jesus Christ expects us to show especially if we claim to be His followers.

The Bible in both the Old Testament and the New Testament has a lot to say about how God repays those who hurt us and this is what we are going to discuss in this article today.

With that said, let’s try to answer our question,” how God will repay those who hurt you,” on our menu today by looking at what the bible has to say about this with references to bible verses.

How God Repays Those Who Hurt Us?

I know that it’s hard to trust God when people are hurting you. But God is faithful, and He will repay those who hurt you in due time.

The Bible in Romans 12:14 says that we should bless those who persecute us bless and not curse them. We are to pray for them and ask God to bless them because they need His mercy just as much as we do.

When you pray for those who hurt you or mistreat you, God will give you the grace to forgive them, and in so doing, you will heap burning coals of fire upon their heads (Proverbs 25:22).

Implying that by doing good to your enemies and those who hurt you, at some point, you will make them feel bad about the way they have treated you which will make them not be at peace with themselves due to a troubled conscience.

Romans 12:19 says that revenge belongs to God and He will repay those who hurt us when the time is right and it’s not for us to seek revenge on people who have hurt us in one way or the other.

If someone has hurt you or mistreated you, don’t get angry with them or retaliate against them in any way. Instead, pray for them and ask God to bless them with His mercy.

Endeavor to be like Jesus Christ who said to his enemies who crucified Him,” Father forgive them for they know not what there are doing,” in Luke 23:24 who never sought revenge and destruction for His enemies and persecutors.

God repays those who have hurt us in many ways such as divine judgment, sicknesses, misfortunes, and much more so that they can have a taste of their own medicine.

See Also: How Does God Handle Those Who Hurt Us? [+ Sermon].

God Will Punish Those Who Hurt You Bible Verses.

Below are 10 bible verses about God punishing those who hurt you to remind you that God will indeed punish your enemies causing you harm in due time.

1. And blessed be the most high God, which hath delivered thine enemies into thy hand. And he gave him tithes of all. Genesis 14:20.

2. And I will bless them that bless thee, and curse him that curseth thee: and in thee shall all families of the earth be blessed. Genesis 12:3.

3. And the Lord thy God will put all these curses upon thine enemies, and on them, that hate thee, which persecuted thee. Deuteronomy 30:7.

4. For I will give you a mouth and wisdom, which all your adversaries shall not be able to gainsay nor resist. Luke 21:15.

5. And ye shall chase your enemies, and they shall fall before you by the sword. Leviticus 26:7.

6. Though I walk in the midst of trouble, thou wilt revive me: thou shalt stretch forth thine hand against the wrath of mine enemies, and thy right hand shall save me. Psalms 138:7.

7. Thine hand shall be lifted up upon thine adversaries, and all thine enemies shall be cut off. Micah 5:9.

8. He shall reward evil unto mine enemies: cut them off in thy truth. Psalms 54:5.

9. When a man’s ways please the Lord, he maketh even his enemies to be at peace with him. Proverbs 16:7.

10. Rejoice not when thine enemy falleth, and let not thine heart be glad when he stumbleth. Proverbs 24:17.

Examples Of God Repaying Our Enemies.

There are several examples in the Bible in both the Old Testament and the new testament of God punishing people who have wronged and mistreated His children in one way or the other.

God has promised to repay our enemies a hundredfold because He’s holy and just and won’t allow your enemies to go unpunished for the unjust evil and hurt they have done to you, and that is exactly what He did for David.

David’s life was a roller coaster ride. From being anointed as king over Israel at the age of 30, to becoming a fugitive from Saul’s pursuit, to living in exile for years, to gain back his kingdom and then losing it again.

God had made him king over Israel but it didn’t take long before David found himself running for his life; first from Saul’s jealousy and then later from the threat of Saul’s son Ish-Bosheth (2 Samuel 4:5-10).

David fled to numerous places including Moab where he married Bathsheba and had Uriah killed so that he could marry her (2 Samuel 11:1-27).

While in Moab, he wrote Psalm 51:1-17 in which he confessed his sins against God and asked for forgiveness. God forgave him and restored him to the throne where he reigned for another thirty years until his death.

During his lifetime, David was able to pay back his enemies many times, for what they had done against him. For example, David destroyed the Amalekites who were once Israel’s greatest enemy.

Also, we see in 1 Samuel 31:1-11 that Saul who sought to after David’s life for quite some time was eventually killed and destroyed also by the Philistines. He died by suicide.

We also see that God repaid the Egyptians by drowning Pharaoh’s army in the Red Sea for the suffering and affliction they inflicted on the children of Israel (Exodus 14:1-31).

Pharaoh and his people oppressed the Israelites for quite some time, but God finally heard their cries and rescued them from slavery by sending plagues on Egypt.

He then parted the Red Sea so that they could escape, drowned Pharaoh’s army in the sea, and then gave them manna from heaven to eat.

The Midianites too oppressed Israel for seven years, but then God sent an angel to kill all their males except for their virgins. The Israelites later attacked them and took all their possessions as plunder (Numbers 31:1-8).

In the new testament in Matthews 27:1-5, we also see that Judas Iscariot who betrayed our Lord Jesus Christ eventually got what he deserved after betraying Christ by suicide.

So, we have seen from the above examples that God will always recompense the evil your enemies have done against you just as He did before in due time.

When you are hurt, it’s only natural to want to get revenge. But that’s not what God wants us to do. Romans 12:19 says, “Do not get overcome by evil, but overcome evil with good.”

The above bible verse is often quoted when a Christian is dealing with someone who has hurt them in some way.

Jesus Christ also tells us in Matthews 6:14,15 that we should forgive those who have wronged us if we want to be forgiven as well for the wrongs we do to God daily.

However, due to our fallen sinful nature, it can be hard to forgive someone who has hurt you and then go on as if nothing happened. This is especially true if the person who hurt you was close to you or if the offense was repeated over time.

But as a Christian, you need to follow the example of our Lord Jesus Christ who never sought vengeance on His enemies even when He could easily destroy them by fire with the help of His angels.

Many times as a Christian, you may find yourself in a position of wanting to seek revenge on those who hurt you badly which makes you resort to even dangerous prayers so that God destroys your enemies.

However, this isn’t the biblical response God expects you to produce if you claim to be His child. Your job is to continue doing good to them and to leave the revenge part to Him.

See Also: When Christian Friends Hurt You [Here’s What To Do].