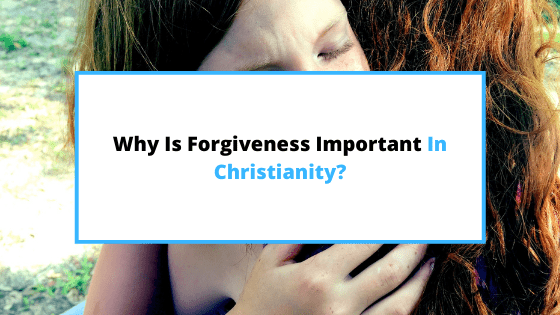 Today in this post, you are going to find out why is forgiveness important in Christianity and your Christian life as a professing Christian.

Forgiveness is a virtue that should be valued and honored by all practicing and professing Christians who claim to be followers of Christ Jesus.

While this may sound like a platitude, the practice of forgiveness is one of the greatest disciplines of our Christian walk. We need to forgive others to be forgiven by God.

When we forgive others, we are following the example of Christ and extending His grace, mercy, and compassion to people who need it.

There are many reasons forgiveness is important in Christianity as we shall see. Forgiveness can be easy or difficult to practice but it depends on how you look at it.

Sometimes forgiving others may seem easy depending on the gravity of the offense but forgiving yourself can prove more challenging at times.

This article provides several reasons why is forgiveness important in Christianity and the rewards gained when practicing this virtue. Let’s dive in.

What Is Biblical Forgiveness?

The Bible in both the Old Testament and the New Testament is full of examples of forgiveness, but what does it mean to forgive someone? Is it more than just saying, “I forgive you?”

Forgiveness is the decision to release your resentment toward another person. It’s choosing not to be bitter and angry toward someone who has wronged you.

It’s also choosing not to hold a grudge and harbor anger or bitterness in your heart against that person. Forgiving someone doesn’t mean that you excuse their sin or accept what they did as okay.

It simply means that you choose not to allow their sin against you to affect your relationship with them or your walk with God. Many people believe that forgiving someone means excusing their behavior or condoning it.

That’s not true at all. Forgiving someone doesn’t mean that what they did was okay; it simply means that we don’t want our bitterness toward them or their actions to have any part in our relationships with them or our relationship with God.

Biblical forgiveness is a gift from God. As Christians, we have been given the power to forgive others for their sins against us. We often think of forgiveness as something that happens once and then we’re done with it.

But the Bible says that we must forgive as God forgives us (see Matthew 18:21-22). That means that unconditional forgiveness isn’t just something you do once; it’s an ongoing process.

The Bible also gives us a lot of details about what true forgiveness looks like, how it works, and how to find it in our hearts when someone has hurt us (or vice versa).

Forgiveness isn’t always easy, but it’s necessary for our Christian living if we want to be close to God and live in harmony with other human beings and by God’s grace, forgiveness can be made possible, no matter the offense or hurt.

What Did Jesus Christ Say About Forgiveness?

The Bible is the best place to find out what Jesus Christ said about forgiveness. The book of Matthew records a parable of an unforgiving servant that Jesus told his disciples.

Jesus told us that forgiveness is a choice we must make. He also told us that if we refuse to forgive others for their sins against us, then God will not forgive our sins either.

In the parable of the unforgiving servant, Jesus Christ further gives us an example of how we should respond when someone wrongs us in Matthew 18:21-35.

In this passage, Jesus tells the disciples about a servant who owes his master 10,000 talents and cannot pay back any of them. The master had compassion for the servant and forgave him all of his debt.

Then another servant owed him 100 denarii and could not pay back even one denarius. When this servant fell on his knees before him and begged for mercy, the master threw him into prison until he paid back what he owed him.

What happened next? That slave who owed ten thousand talents was thrown back into prison because he did not have the money to pay it back (Matthew 18:24).

He was thrown back into prison because he didn’t show the same mercy and forgiveness he was shown earlier to his fellow servant who owed him less than what he owed his master who forgave him earlier.

Such will be the case with us as well if we fail to forgive others who wrong us forgetting that we commit many offenses against God that we can’t repay at all.

See Also: How To Deal With An Evil Person Biblically [+ Sermon].

Why Forgiveness Is Important In Christianity?

Jesus Christ taught several parables about forgiveness and reconciliation. In Matthews 18:21-35, Jesus tells a story about a man who owed another man a large sum of money.

The debtor was unable to pay back what he owed, so his creditor took two of his slaves, sold them as slaves, and forgave all the debt.

When this happened, the debtor was angry with his creditor for forgiving him all that money. The point Jesus Christ is making is that if our debts could be forgiven by someone else, why wouldn’t we forgive others when they sin against us?

The apostle Paul in the New Testament also emphasized the importance of forgiveness in his letter to the church at Corinth (2 Corinthians 2:5-11).

He reminded them that when he came to them for help in ministry, they refused to give him anything and instead treated him poorly.

Paul said that even though they had treated him badly and refused to help him out financially, he didn’t hold any bitterness toward them; instead, he prayed for them daily so God would bless them more than ever before.

Forgiveness is important because it helps us learn how to love others. When we can forgive and show mercy to someone who has wronged us, we can demonstrate our love for that person by choosing not to hold a grudge against them.

Holding grudges only hurts us and our relationships with others. For example, if you hold onto resentment towards your spouse or friend over something they did in the past, it will eventually lead you down a destructive path in your relationship with them.

Secondly, It is also important because it makes us better people by allowing us to move on from past mistakes and to focus on improving our lives instead of dwelling on things we cannot change.

As humans, we all make mistakes, but if we allow ourselves to dwell on those mistakes then we will never be able to move forward with our lives. We must learn from our mistakes so that they do not happen again.

Additionally, forgiveness is important in Christianity because it shows and demonstrates the unconditional love and kindness of Jesus Christ.

The love of Jesus Christ is an act of mercy and grace, and it gives people another chance at life, hence making reconciliation with others possible.

Forgiveness is a vital part of Christianity because, without forgiveness, we would have no hope for reconciliation, redemption from sin, and salvation. Forgiveness is also necessary for healing to begin, for the victim and the perpetrator.

Furthermore, forgiveness is especially important for Christians because it’s at the core of our faith. The Lord Jesus Christ taught His disciples that forgiving others would be one of the key signs that they were following Him (Matthew 6:14-15).

Implying that unforgiveness has no room in the life of a true Christian but if you have unforgiveness in your heart and claim to be a believer, then, your Christian faith is fake and in vain.

Christians believe that Christ Jesus died on the cross as an act of forgiveness as He took upon himself all our sins so that we could be forgiven if we accept his sacrifice for us (Romans 3:23-24).

But why does it matter if we forgive someone? Why let things go? It matters because holding onto resentment and anger toward other people is unhealthy for us. We need to show grace to others as we make mistakes, too.

Holding onto negative emotions doesn’t do anyone any good not even ourselves. We don’t want to end up coming across as angry people.

Now that you have learned why is forgiveness important in Christianity, I hope this post will help you forgive others you may not have forgiven yet due to one reason or the other.

As you have read above, we need to forgive others if we want to be forgiven as well by our Heavenly Father. If we don’t, neither will He forgive us, too.

In closing, if this post has been helpful to you, let me know in the comments below, and don’t forget to share before you leave. Stay blessed. 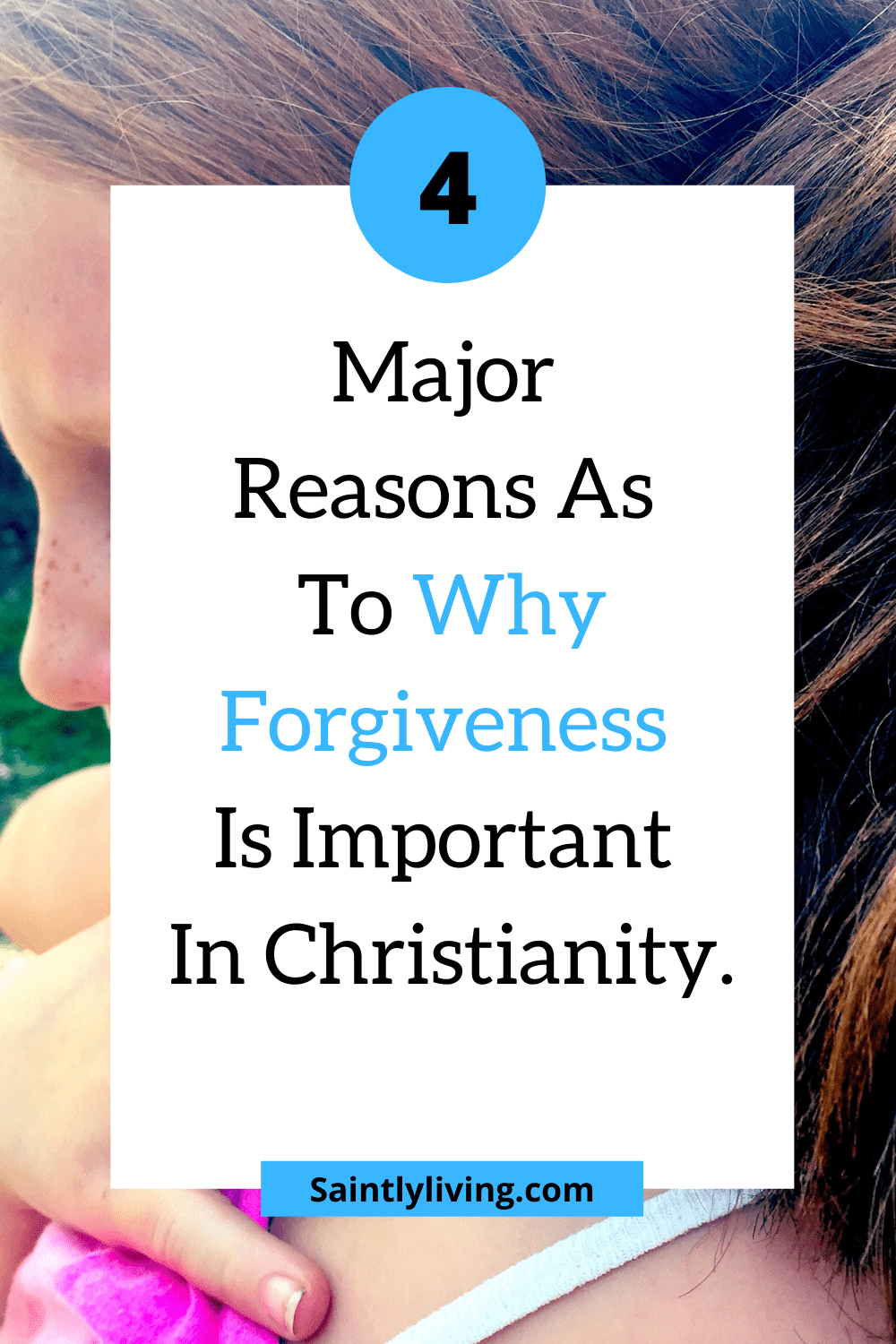 2 thoughts on “Why Is Forgiveness Important In Christianity? [+ Sermon]”