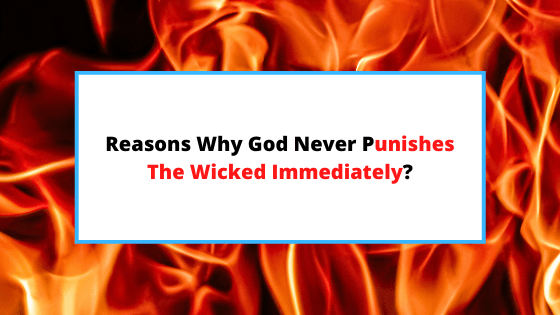 If you have been asking the above questions, know that you are not the first one to do so. Even in the Old Testament, many people such as David and Job asked these very same questions as to why God never punishes the wicked immediately.

When you read the bible closely, there are several reasons why God never punishes the wicked immediately for their evil deeds.

But one thing you must understand as Isaiah 55:8,9 tells us is that God’s thoughts are not our thoughts neither are His ways our ways nor do we have God’s perfect knowledge and understanding to understand why He does certain things.

Moreover, you need to understand that just because the wicked are not punished immediately doesn’t mean they won’t face divine punishment and judgment for their iniquity eventually.

In this article today, I will try to list and explain certain reasons why God doesn’t punish the wicked immediately to give you a better understanding of this matter concerning the justice of the wicked and God’s character.

It’s a question that many of us have wondered about. Why does God let bad things happen to good people? Why doesn’t He step in and do something about the wicked?

The Bible gives us the answer: because He is patient, longsuffering, and merciful to us not willing that any of us should perish but come to repentance to obtain salvation and eternal life (2 Peter 3:9).

But why does God need to be patient with us? Shouldn’t we all automatically love Him, even before we are born? Sadly, that can’t be the case because we are not programmable robots.

Remember, God has given us free will to choose whether or not we will follow Him. Moreover, this freedom of choice allows for sin and disobedience.

So God has allowed for disobedience to occur in His creation, including ourselves (Romans 5:20). But this is only possible because of His patience and mercy toward us (Romans 2:4).

You also need to understand that God doesn’t punish sinners and wicked people on the spot because it would be unfair to them. How? If you ask.

If God were to punish the wicked immediately, it would be unfair to them because they would not have had a chance to repent and turn from their sin.

The Bible in Jeremiah 18:1-6 tells us that people are like clay vessels in the hands of the potter who’s God in this case. When a potter makes a clay vessel, he does not destroy it until he has finished making it.

In the same way, God does not destroy sinners until He has finished using them for His purposes (see Romans 9:21-23). Additionally, God sometimes uses wicked people as instruments of judgment (see Revelation 6:8; Isaiah 10:5-15).

Not only that, God never punishes the wicked immediately to allow time for His own glory and praise before He destroys them if they don’t repent (see 2 Thessalonians 1:9-10).

Perhaps the most important reason why God never punishes the wicked immediately is that He has no pleasure in the death of the wicked as we see in Ezekiel 18:23.

Consequently, He allows such people to live a little longer so that peradventure they may repent and turn from their wicked ways and unto His Son, Jesus Christ for salvation.

You need to understand that God calls all wicked people to repentance, which is why He gives them the grace period for them to do so as He doesn’t want them to face eternal destruction in hell prepared for the devil and his angels (Matthews 25:41).

God Is Patient And Long Suffering.

In (2 Peter 3:9-11), we see that God is patient and longsuffering towards all of us that is why He never punishes the wicked for their evil deeds immediately to give them enough chances for them to repent.

The longsuffering of God towards evil people is due to The infinite love He has for His creation as He doesn’t want us to face eternal punishment and suffering in hell with the devil but have eternal life found in His son Jesus Christ.

And this eternal life that comes after salvation when one accepts Jesus Christ as their personal Lord and savior is freely available to anyone who believes in the Lord Jesus Christ.

Just think about it in your own situation, if God wasn’t patient and longsuffering to you when you were wicked and doing all manner of bad things before you became born again, where would you be now?

The simple answer to that question is that you will be dead and in hell by now weeping and gnashing your teeth with your fellow wicked whose grace period was over.

You need to remember that you are alive now because of God’s mercy, which enabled you to even have the time to repent and turn from your wicked ways before it was too late to do so.

So, when you see the wicked not being punished immediately for their evil deeds, just remember that God is giving them a grace period for them to repent and turn from their evil ways before their final judgment.

However, if they refuse to repent and turn from their evil ways, God’s wrath will quickly descend upon them and have their lives cut short, as He’s done since the inception of this world.

Remember, God’s word says in Proverbs 11:21 that the wicked will not go unpunished for their evil deeds and will eventually have to reap what they have sown in due time if they don’t repent.

What Is The Reward Of The Wicked?

The bible has a lot to say about the final reward of the wicked that will come on all wicked people who refuse to repent and turn from their evil ways to save themselves from sudden death and eternal destruction awaiting them when they die.

The first reward of the wicked we see in the bible is that they will eventually be turned into hell as Psalms 9:17 tell us which implies that the wicked will finally be cast into the lake of fire along with Satan where they will spend the rest of their eternity.

In short, an evil person who doesn’t repent of their sins will have to live with the fact that they will never spend eternity with God in heaven which is full of everlasting joy and bliss that is not yet known to mankind.

Instead, such people will be eternally separated from God and punished with everlasting destruction away from the presence of our Lord Jesus Christ as the apostle Paul tells us in the New Testament in 2 Thessalonians 1:9.

Moreover, we are further told in Psalms 10:4,5 that there will be no hope for evil doers and the wicked who lead others astray in their evil deeds. Instead, they will perish forever and their evil works will follow them for all eternity in hell.

So, in short, the wicked will eventually be punished by God and receive their just reward for the wicked deeds they did in their lifetime.

All unrepentant wicked people will eventually face God’s wrath and eternal judgment in the lake of fire when all is said and done (Revelations 20:11-15).

While the righteous will eventually spend eternity in heaven with God, Jesus Christ, the holy angels, and redeemed saints of all time. Won’t that be wonderful dear saint?

If you are a wicked person doing all manner of evil things as you are reading this, now is the time for you to repent and come to Jesus Christ for salvation before it’s too late.

Be rest assured that if you don’t turn from your wicked ways, divine judgment and wrath awaits you in eternity when you die unrepentant in your sins.

See Also: Importance Of Salvation And Why Care? (+ Video Sermon).

Remember, as wicked as wicked people may, be the Lord still wants them to repent and not perish in hell so that they can be with Him in heaven and not have to go to hell.

In closing, if this post was of great help and benefit to you, let me know in the comments below, and don’t forget to share before you leave. Stay blessed.

4 thoughts on “Why Doesn’t God Punish The Wicked Immediately? [Sermon]”