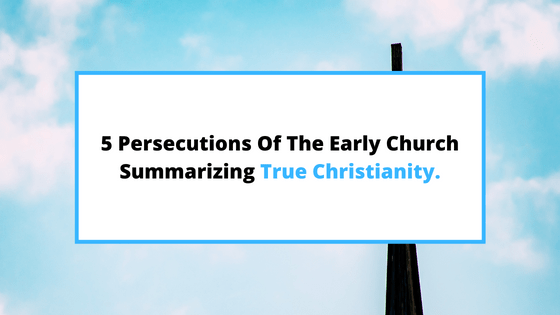 We all know from the bible in the New Testament that the Christians and believers of the early church were persecuted and faced death for their Christian faith.

In this article, we shall look at the 5 major persecutions of the early church early Christians faced for merely believing and following in our Lord Jesus Christ.

Jesus Christ made it clear in John 15:18-27 that in this present evil world, we will face suffering and persecution just for His sake. But, that must not discourage you as great will your eternal reward be in heaven if you endure persecutions for His sake.

With that said, let’s look at the 5 major persecutions of the early church and early Christians faced in their time that will encourage you to be strong in the Lord if you are being persecuted for your faith in one way or another.

Below are the 5 major persecution of the early Christians and believers of the early church by the roman empire for their faith.

1. Killings By The Roman Empire.

It’s just a matter of fact that the early Christians faced a lot of persecution during the Roman Empire by Emperor Nero who were avid idol worshippers who worshipped many gods and sacrificed babies to them.

During the time of Emperor Nero, the emperor of the Roman Empire around 64 AD at the time, Christians were even falsely accused and blamed for the fire that started in Rome.

As a result, many faced death and were even thrown in the den of Lions to be eaten alive in front of the crowd all because of believing in our lord Jesus Christ for their salvation and eternal life.

The death early Christians faced in the Roman Empire must motivate you not to fear death when you face persecution or live in a place where Christians are killed for their faith as great will your reward be in heaven if you don’t deny Christ even in front of death.

During this time, many Christians were put to death for refusing to worship statues of Caesar or any other gods. Emperor Decius ordered that all non-Christians be thrown into prison while he took over as emperor.

However, many Christians escaped from their prisons during this time because some prisoners helped them escape by providing them with food and shelter until they could escape into hiding places unknown to the Roman government.

3. The Martyrs of Praetorium.

In 202 AD Emperor Septimus Severus ordered that all those who refused to sacrifice animals for Emperor Marcus Aurelius would be put to death by having their throats slit or being burned alive on stakes set up around them.

During this time, many Christians faced martyrdom and torture for their faith by the wicked emperor Maximian when he visited Nicomedia where he made Christians be whipped and tortured in public.

The above 3 early persecutions we have looked at so far in the first and second centuries are nothing new as even in the old testament, Christian martyrs were persecuted and killed for their faith in God.

Even now, many Christian face persecutions especially in the Middle East where many Christians are beheaded for their faith. However, that must not discourage you from following Christ.

The Jews who practiced the religion of Judaism and rejected Christ Jesus despite Him physically appearing to them during Christ’s earthly ministry also were responsible for persecuting Christians for believing that Jesus Christ was the Messiah.

This can be seen in the case of Apostle Paul who was then Saul at the time who persecuted the early Christians for denouncing the religion of Judaism and choosing to follow Christ by throwing them in prison as we see in Acts 9:1-31.

Paul who was then Saul before his conversion was among many examples of many Jews at the time who persecuted Christians for their religious faith during the first century after Christ’s death and ascension to heaven.

Jews at the time never wanted anything to do with the name of Jesus Christ, which is why they never believed Him as their messiah in the first place, and had Christ Jesus crucified by the roman authority and soldiers on the cross.

Last but not least, we will also talk about Stephen another early Christian martyr during the persecution of the early church who was stoned with stones for preaching Christ to the Jews who were angry with Him for professing Christ to them.

Stephen’s death and martyrdom can be seen in Acts 7:54-60 where he was stoned for professing Christ by his fellow Jews who wanted nothing to do with Christ.

Ultimately, Stephen became the first Christian martyr to be martyred for his faith in Christ Jesus at just the mere age of 36.

The martyr of Stephen for his faith must inspire you as a young Christian to die for Christ, whatever the cost even if it means death. Remember, Jesus Christ tells us in John 12:25 that if you love your life not to lose it for Him, you will lose it in the end.

I hope the above 5 persecutions of the early church will also encourage you to endure persecution for Christ’s sake just as the early Christians and believers did as great will your eternal reward in heaven if you do so.

In closing, if this post has benefitted you in one way or the other, let me know in the comments below, and don’t forget to share before you leave. Stay blessed.