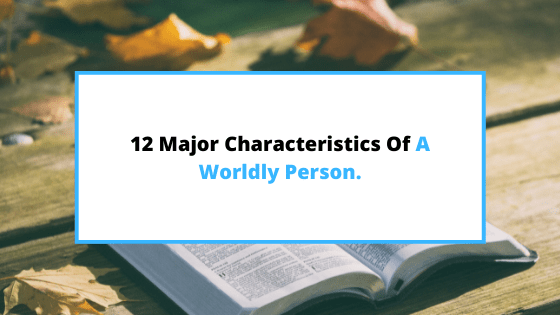 In this post today, you will discover the 12 characteristics of a worldly person that one will manifest in their life if a spirit of worldliness is in them.

There are many characteristics that a worldly Christian divorced from their Christian faith will exhibit in their life if they are in love with the world and this post will focus on the 12 major ones.

With that said, let’s look at the 12 major characteristics of a worldly person or worldly believer that will show that you are truly in love with the world and not God.

Who Is A Worldly Christian?

A worldly Christian is a person who lives a life similar to the world. The world does everything for its satisfaction, and so does this person. They go to church for the sake of going to church and their desire to please God is low or non-existent.

Worldly Christians are also madly in love with the world and the things of this world that is why they model their lifestyles to suit that of the world to get its approval.

However, if you are a true Christian, you can’t afford to live like the world because you are not of this world as Jesus Christ tells us in John 17:16 because if you do, it clearly shows you are of the world, not His.

Related: 11 Signs Of Worldliness [That Show If One Is Worldly].

12 Characteristics Of A Worldly Christian.

Take your time to read the 12 characteristics of a worldly Christian below who is without the life of Christ in them.

One of the characteristics that will clearly show if a person is worldly is they will love the world and the things of this world passionately more than God.

1 John 2:15-17 warns every believer not to love the world or the things that are of this world but if you are a worldly person, this won’t be the case as you will find the above bible verse very hard to do.

If you love the world, you will be deeply immersed in the things of this world clearly showing that you are a worldly person whose loyalty and allegiance are to the world and not God.

Being carnally minded which is death as Romans 8:6-10 tells us in the New Testament is among the common characteristics of a worldly person you will notice in a world man or worldly woman who loves the world.

Someone who’s worldly will only mind the carnal things of this world that please and gratify the flesh and will have no interest in the spiritual things of God that bring eternal life.

This is why 1 Corinthians 2:14 tells us that natural man cannot perceive spiritual things which are foolish to him as they can only be discerned by a person with a spiritual mind of Christ.

Related: 15 Major Traits Of A Carnal Man [Without The New Birth.]

Another characteristic that will show if a person is worldly is that they will love money and will do anything to have it at all costs even if it means killing and swindling others just to have that piece of paper.

1 Timothy 6:10 tells us that the love of money is the root of all evil and its effects can be seen in our daily lives in many people who have done unimaginable evil things just because of money.

If you are a worldly person who loves money, you will do anything just to have that money at any cost due to the love of money that’s active in your heart.

If you are a world person, you will not love God due to the love of the world that has completely occupied your heart leaving no room for loving God.

This is why the Lord Jesus Christ taught us in Matthews 6:24 that you can’t serve two masters as you will either like one or despise the other. In this case, if you are a worldly person, you will love the world, which will be your master instead of God.

And this lack of love for God will manifest in many ways in your life like being uninterested in reading God’s word, thinking that going to church is just a waste of time, spending more time on the things of this world, etc.

Lack of interest in the spiritual things of God found in His word where one can obtain godly wisdom for living wisely here on earth will be another trait that a worldly person will show if they are of the world.

Instead, such a person will prefer to go watch sports, movies or go partying rather than going to church which they will find boring and a waste of their time by the way. Why? Because they love the world more than God.

Also as 1 Corinthians 2:14 tells us, this lack of interest in spiritual things like reading God’s word or praying will be because a worldly person cannot perceive spiritual things and see the eternal benefit they have to their precious soul.

6. Critical Of Other True Christians.

Being critical of other true Christians faithfully living their lives for the Lord Jesus Christ is one of the common characteristics of a worldly person who’s divorced from God or their Christian faith and married to the world which James 4:4 calls spiritual adultery.

Many worldly Christians today are critical of those who are sold out for Jesus Christ. They see them as religious nuts and don’t understand why such people would give up a good-paying job or career for the sake of Christ.

It just doesn’t make sense to them because they haven’t grasped that being a Christian means more than just going to church on Sunday mornings as it changes your whole life which means giving up the world for the sake of Jesus Christ.

A world person is also a materialistic person who’s so obsessed with gaining wealth, riches, securing money and earthly possessions, and having more than what others have.

This can be seen in our society today by many materialistic people who try to live up to the Jones of the west, which is why many post their fake materialistic lifestyles on social media so that everyone can see that they are rich.

However, such people due to covetousness in their hearts forget what Jesus Christ said in Luke 12:15 that one’s life doesn’t consist of the possessions or riches they have.

A worldly person will also not be filled by the Holy Spirit which explains why they are worldly in the first place without any interest in the spiritual things of the bible.

As a result, such people will be carnal and worldly in nature as a spirit of carnality and worldliness is controlling their lives makes them carnal in the way they think or do things.

Romans 12:2 tells a believer not to be conformed to this world but to be transformed by the renewing of the mind won’t apply to a world person as that person lack the presence of the Holy Spirit in their life to help them renew their mind so that they become spiritual.

Related: 10 Warning Signs The Holy Spirit Has Left You [ For Sure.]

9. Lives According To The Flesh.

Another characteristic trait that a worldly person will show is that they will walk according to the flesh and not the Spirit as the apostle Paul commands us in Galatians 5:16.

This implies that a worldly person or a worldly believer will only be interested in doing things that please and gratify their sinful flesh as that’s what makes the flesh feel good even if it’s against God’s word.

As a result of walking after the flesh instead of the Spirit, a worldly person will also be motivated by worldly desires and live by them and not after the desires of the Spirit.

10. Lives For The Present Moment.

If you are a worldly person, you will live for the present moment, not for the world to come in eternity. He or she will not think much about the future life or eternity like the rich fool in Luke 12:15-34 who thought will live forever.

Instead, will only think about having and living their best life now, which is now a common trend in society today by many people who quote on quote want to be happy outside God.

But as a true believer, you must not think or live like a worldly person as this world isn’t your home because you are only passing by to a far better country whose maker and architect is God as we are told in Hebrews 11:16.

11. Compromises With The World.

A worldly Christian or worldly person will also compromise with the world to be loved and accepted by the world that is why they will bring their Christianity down to the level that the world will accept.

This can be seen in many churches and believers today who are no different from the world today be it in their dressing, lifestyle, and worship that is why nowadays, it’s difficult to differentiate a Christian from a heathen as they look no different now.

Many people and so-called Christians have compromised their Christian faith to be friendly with the world forgetting the warning God’s word gives in James 4:4 that friendship with the world is enmity with God.

Related: 11 Major Causes Of Backsliding In Many Christians Today [+ Sermon].

Last but not least, Worldly Christians or worldly people often pretend to be more spiritual than they really are; they may act spiritually.

Nevertheless, if you examine their lives closely, you will often find that there is no real evidence of the fruits of the Spirit that Galatians 5:22-23 talks about being manifested in how they live their lives regularly.

Instead, they just try to fake it that they are spirituals when in fact are just as worldly as any heathen out there even worse due to the religious hypocrisy most fake spirituals have and such people always think they are right while others are wrong due to their spiritual pride.

The above 12 characteristics of a worldly person are just among many characteristics out there that characterize worldly people who are without Christ in their lives. In closing, if this post edified you, let me know in the comments below. Stay blessed and don’t forget to share. 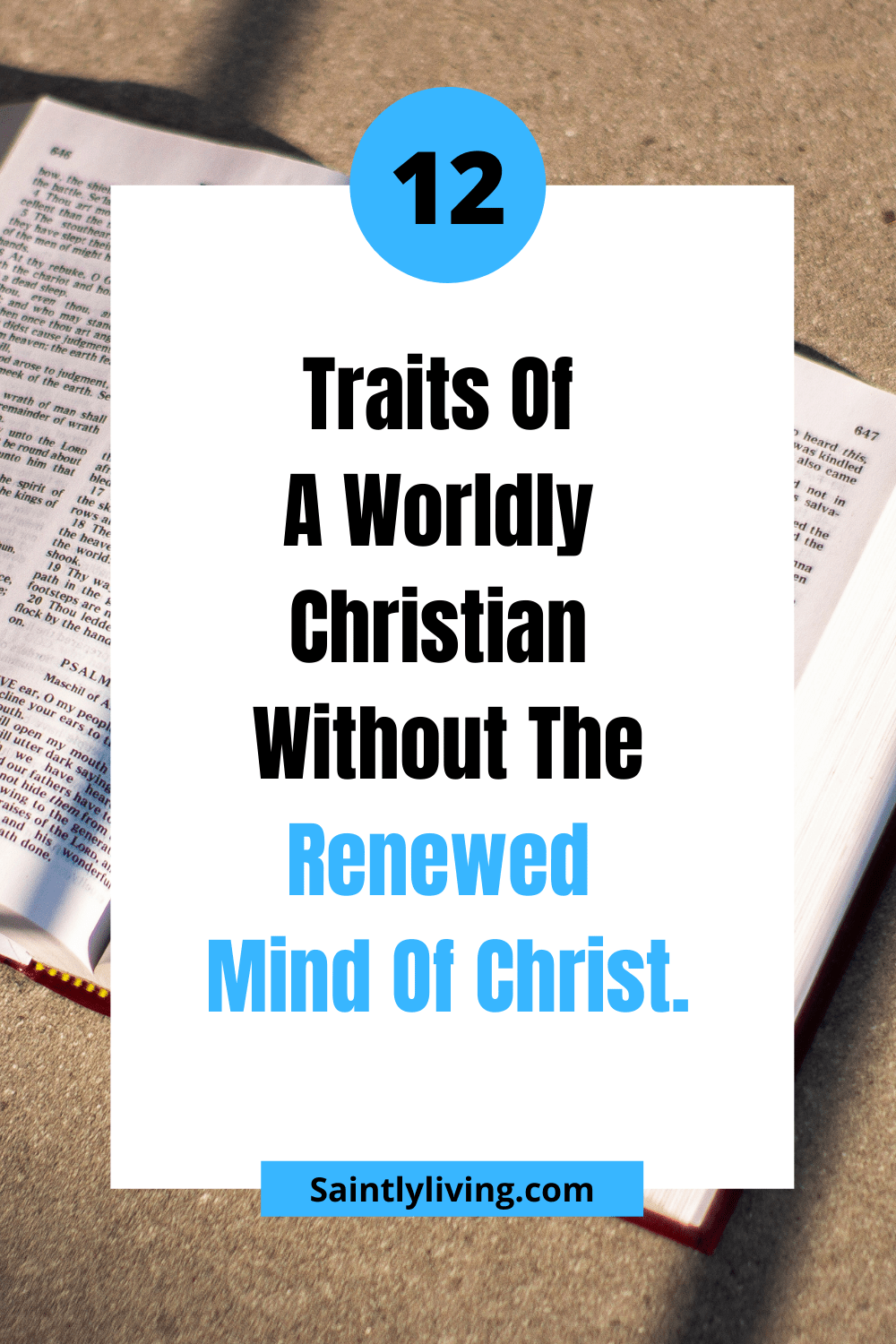