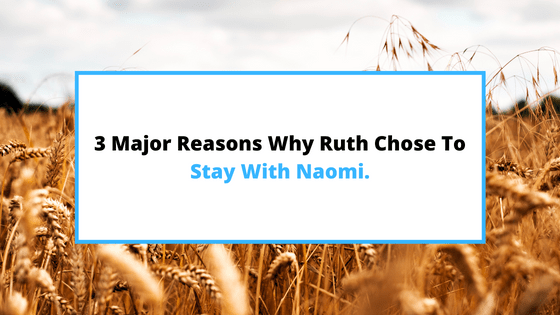 Why did Ruth stay with Naomi? This is what we will discuss today. Previously, I discussed the 5 major lessons from the book of Ruth, in this post today, we will find out why she did this.

Ruth’s story in the Old Testament begins in Ruth 1:1 where we see that Ruth along with her sister-in-law Orpah lived in Moab but after losing their husbands and now facing a bleak future in Moab, they decided to go back to Bethlehem.

Their journey was joined by Naomi, their mother-in-law. However, along the way, Naomi urged her two daughters-in-law that they must return to Moab as she can’t guarantee them a good future if they stayed with her.

The devotion to Ruth and loyalty to Naomi even during uncertain times when her future wasn’t guaranteed speaks volumes about the godly character Ruth had.

With that said, let’s look at today’s question, why did Ruth stay with Naomi? That will serve as a great lesson for all believers today as to what true loyalty and serving God is all about we can apply in our lives today.

Why Ruth Chose To Stay With Naomi?

There are many lessons we can get from Ruth’s decision to stay with Naomi despite her sister-in-law Orpah choosing otherwise and returning to Moab to serve her gods.

The decision of Ruth to stay with Naomi and her devotion to her as well as her willingness to serve the true living God Naomi served showed that Ruth understood what true loyalty and devotion are all about.

You need to understand that Ruth was a Moabite woman who came from a foreign land of Moab that practiced idol worshipping and many things that were abominable in God’s sight.

However, she didn’t allow her ugly past to hinder her from choosing to serve the true living God of Naomi and change her destiny for the better.

In fact, this is one of the major reasons why Ruth chose to say with Naomi. She was determined and resolved she will no longer serve and worship the former idols she left in Moab anymore.

This is why she said in Ruth 1:16 that the true living God Naomi served will be Her God, too and her people will now be her people as well.

Her wise choice to choose to be with Naomi unlike Orpah, who decided otherwise, paid dividends in the end as God rewarded her for her faithfulness and devotion to Naomi and Him.

Consequently, she ended up meeting Boaz who acted as a redeemer to her and ended up marrying her. Due to this wise choice to serve the God of Israel, Ruth ended up being part of the bloodline of our Lord Jesus Christ, our redeemer today.

Related: 5 Vital Lessons From Ruth Chapter 1 {For All Believers Today.}

Ruth also stayed with Naomi because she loved her mother-in-law dearly, which is why she pledged her loyalty and devotion to mother in law by choosing to stay with her no matter what.

Her loyalty and devotion were genuine and weren’t superficial and based on circumstances. She by faith decided that she will follow Naomi wherever she goes even to the point of death (Ruth 1:17).

This serves as a great lesson to all of us New Testament believers and Christians of how we must serve God and have faith in Him even during tragedy or uncertain times.

As Christians, we need to be faithful to the Lord not just when things are good but even during times of tragedy or when our faith is being tested through various trials.

As we see in the book of Ruth in the Old Testament, Ruth chose to be with Naomi even if it entails living a life of hardships and suffering, as she truly loved her mother-in-law and the true living God she served.

Ruth’s faithfulness and decision to be with Naomi never went unnoticed in God’s sight which is why He just had to reward her faithfulness after reaching the land of Bethlehem through the redemption of Boaz she ended up marrying (Ruth 4:13-17).

Her loyalty and devotion serve as a benchmark of how what true love, loyalty, and friendship are all about which seem to be lacking in many friendships and relationships today.

Many people today are only willing to be friends with you when you are having good times or when you have something to benefit such people. Ruth however wasn’t such a fake fair-weather friend as she understood what true friendship is all about.

Ruth’s loyalty to Naomi is one of the most important lessons we can learn from the Book of Ruth. We see this in several ways. First, it shows how God looks at us and how we should look at ourselves in relation to our friends and family.

The Bible says that He has a purpose for everything we do and that He always loves us even when we don’t understand why He does certain things (1 Corinthians 2:4).

We also see this in how Ruth serves Naomi and her family without any thought for herself or her own selfish desires. She takes care of them even though she has no idea what will happen next.

This is something that everyone needs to do more often. We need to put our own desires aside and selflessly serve others because it is what Jesus Christ would do if He were here today (John 15:13).

It doesn’t matter whether someone is rich or poor, young or old, ugly or beautiful. All are equally important in God’s eyes (Matthew 25:40).

When you do something good for someone else selflessly without any selfish motives, it gives your own life a sense of purpose and meaning that otherwise might be missing.

The story of Ruth in the bible though she came from a foreign land through her faithfulness, loyalty, and devotion to Naomi summarizes what a genuine friendship based on love, respect, honesty, and humility is all about.

Just as Ruth exhibited true selfless unconditional love, kindness, devotion, and loyalty to Naomi, so must we do to others and God. Our love and faithfulness must not be based on what we can get from God but must be because we love Him.

I hope the above post on why did Ruth stay with Naomi has helped you learn one or two things you can apply in your Christian life as a believer.

In closing, if the above bible story of why Ruth stayed with Naomi was inspirational to you, let me know in the comments below, and don’t forget to share it before you leave. God bless. 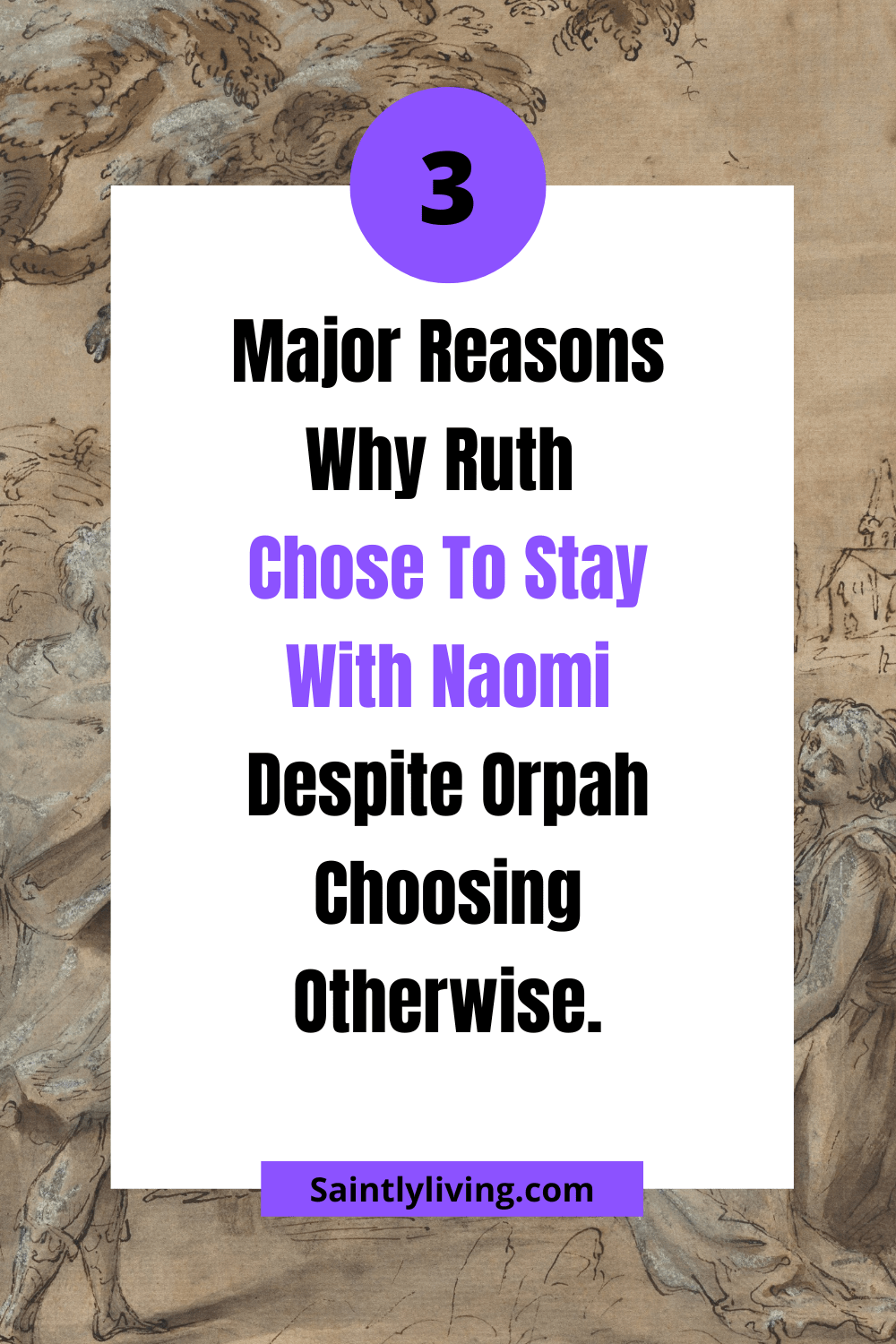