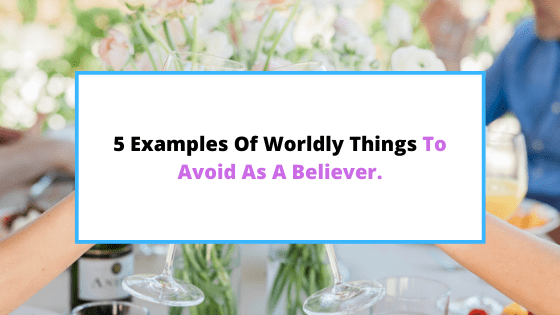 The Bible in both the Old Testament and the New Testament talks about many examples of worldly things to avoid if you are Christian or a follower of our Lord Jesus Christ.

Jesus Christ tells us in John 17:16 that we are not of the world just as He’s not of this world though we are in the world which is why as a believer, you need to be on guard of worldly things and worldly please that can draw you away from God.

As Christians, we must never allow the worldly things of this world such as fame, riches, entertainment, etc. to distract us from focusing our attention on heavenly things where our true riches are.

In this article today, I will discuss the 5 common worldly things to avoid as a believer that can draw you away from God with reference to bible verses against worldliness.

What Are Worldly Things?

Worldly things are anything or earthly things that distract us from God and His Word. They include all forms of entertainment, such as television, movies, magazines, music, sports, and the Internet.

These things can be fun, but they aren’t good for us if we let them take over our lives. The Bible tells us in 1 John 2:15 that we should not love the world nor the things that are in this world.

The apostle John wrote that to Christians who were being tempted to turn away from God’s truth because of their love for the world.

Loving the world means being so attracted to it that we spend time with it instead of with God. It means trusting in our own abilities rather than in God’s power to help us through hard times.

When we love the world more than God’s wisdom and Word, we become worldly people i.e. people who live like unbelievers instead of the way Christians should live.

Related: How To Avoid Worldly Things [That Please The Flesh].

What The Bible Says About Worldly Things?

It is very important to know what the Bible says about worldly things. The reason I say this is that many people have been deceived into thinking that they can have a life of sin and still go to heaven if they believe in Jesus Christ as their Savior.

That is not true, however. God wants us to live our lives for Him, not for ourselves. We must learn how to put God first in everything that we do. He wants us to be holy and set apart for His service (1 Peter 2:9).

That’s why He gave us His Holy Spirit to guide us into all truth and the things of God, so we could obey Him more easily rather than obeying the flesh to sin (Romans 3:30).

The Bible is clear in Romans 12:1,2 that we should not be conformed to the world, but should be transformed by the renewing of our minds in Christ Jesus.

Paul the apostle also tells us in Ephesians 5:11 to have nothing to do with the unfruitful deeds of darkness, but instead expose them.

To live as a Christian in this world, we are not to live the way worldly people live by indulging in the worldly and ungodly things they do that have nothing to do with God.

Related: 11 Signs Of Worldliness [That Show If One Is Worldly].

5 Examples Of Worldly Things To Avoid.

Below are the 5 examples of worldly things and worldly pleasures you need to avoid as a Christian that are not compatible with Christian living.

Worldly fashions are some of the examples of worldly things that you need to avoid as a Christian and have nothing to do with them especially if you are a Christian lady.

God’s word in 1 John 2:15-17 tells us not to love the world nor the things that are of this world and worldly fashions are a good example of worldly things all professing Christians must not or have anything to do with them.

Sadly, many so-called Christians especially ladies are so much in love with the worldly fashions of this world be it worldly dressing, worldly make-ups, worldly hairstyles or paintings, etc.

This explains why you can’t differentiate a church-going lady from a worldly one as their lifestyles and way of dressing are just the same but this ought not to be so if you claim to be of Christ.

The entertainments of this world are also one example of worldly things you need to avoid if you claim to be a true Christian as they do nothing to your spiritual growth than to draw you away from God.

Examples of worldly entertainments you need to avoid as a Christian are: worldly movies, worldly, worldly parties T.V shows, worldly sports, etc., which won’t benefit you spiritually at all.

Unfortunately, many professing Christians are still in love with the entertainments of this world more than the things of the Lord Jesus Christ such as prayer, going to church, or daily Bible reading.

The love of worldly entertainment explains why many Christians are lukewarm in their Christian faith as the entertainment of this world has choked the first love for the things of God they once had before.

Many so-called Christians today would rather go to clubbing, sports, or parties than to go to church which they find boring but as 1 John 2:15 tells us as we said earlier, you are not to love the world entertainments of this world if you claim to be of God.

Worldly music is very common even among many professing Christians today but I need to make one thing clear not all secular music is bad e.g. instrumentals and inspirational secular music that motivates you to do great things in life.

When I talk about the worldly music Christians must avoid, I am talking about the specific kinds of lustful music that stir and arouse the flesh to sin like music that promotes sexual immorality, violence, hate, or music filled with filthy language.

As a believer, you need to listen to music that will edify your soul and bring glory to God and not music that will just encourage you to do sinful things by arousing your flesh e.g. explicit music videos or lyrics that promote promiscuity.

The world we live in is filled with a lot of dirty music corrupting many today be it on streaming platforms that you must have nothing to do with as a Christian as they will pollute your mind.

Remember, you are what you listen to and if you listen to music that corrupts your mind, your action will show as well. Proverbs 18:15 tells us we need to have the ears of the wise so that we don’t listen to the trash found in a lot of worldly music today.

Worldly friends who have no interest in the things of the Lord must also be avoided in your life if you are a Christian, as the spirit of worldliness controlling them will soon be transmitted to you.

This explains why when you associate yourself with worldly and ungodly friends; it’s just a matter of time before you start liking and indulging in the worldly things they like.

Remember, 1 Corinthians 15:33 tells us that we must not be deceived, as evil communication will always corrupt good morals. As a believer, you must endeavor to seek those godly friendships that will draw you closer to God and not away from Him.

Many Christians who were once strong in the things of the Lord have been ruined by evil friends they decided to associate with and are no more today. Don’t let that be you.

Last but not least, as a believer, you also need to avoid evil and immoral girlfriend and boyfriend relationships that have ruined many Christians and brothers today in the church who were careless.

The reason why sexual immorality is rampant even in churches today is that many so-called Christians are in immoral girlfriend and boyfriend relationships that encourage premarital sex.

1 Corinthians 6:18 tells us that we must flee sexual immorality which is commonplace among many young people today which is as a result of these illicit relationships with the opposite sex that are only promoting promiscuity.

Related: 54 Godly Relationship Quotes To Help You Maintain Your Chastitiy.

The above 5 worldly things to avoid discussed above are among many worldly things out there you need to avoid as a Christian that can’t even give you eternal life but will only draw you away from God. In closing, if this post edified you, let me know in the comments below, and don’t forget to share before you leave. Godspeed. 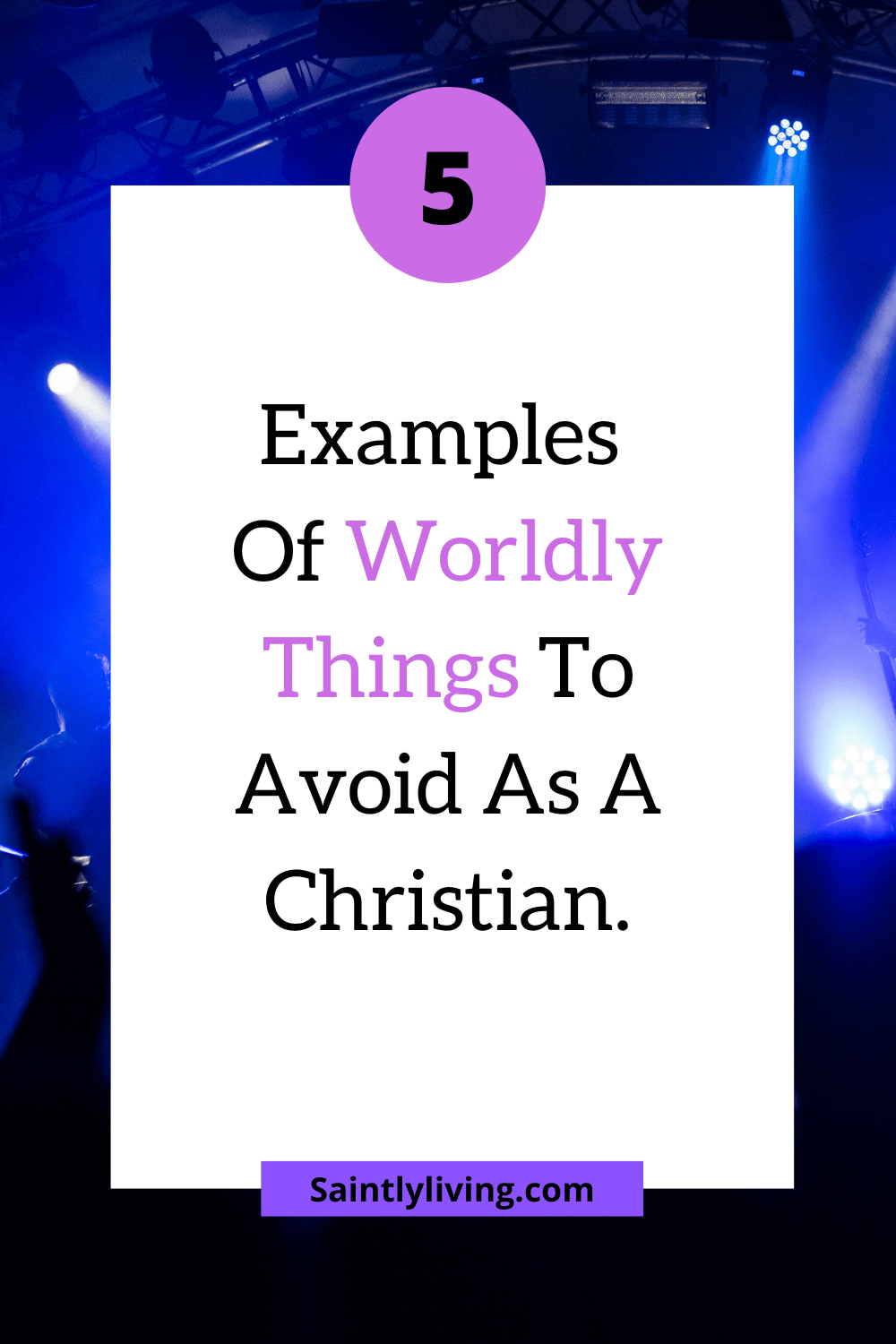