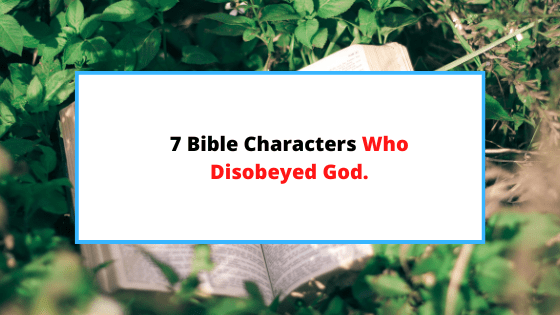 Disobeying God’s commandments written in God’s world is never always a good idea as it just brings God’s judgment and punishment to a person who dares to live a life of disobedience to His word.

I hope and pray that after reading the major bible characters in both the Old Testament and the New Testament who disobeyed God and were punished for that in this article, you will shun any form of disobedience in your life.

With that said, let’s look at the 7 major ungodly characters in the bible who disobeyed God that will remind you that God always punishes disobedience and He’s no respecter of persons.

Take your time to read the 7 in fact 5 ungodly characters in the bible who disobeyed God who will remind you that disobedience to the Lord always brings judgment and wrath except for King David and Adam And Eve as those repented in the end after disobeying God at one point in their lives and are in heaven now.

Kind David even though he was a godly person after God’s own heart disobeyed God at several points in his life one of which was the numbering of the Israelites as we see in 1 Chronicles 21:1.

If you follow the story in the above bible verse, you will see that King David was not allowed to number the children of Israel but did it anyway. Consequently, God struck the Children of Israel with a plague for 3 days.

The second instance King David Disobeyed God was adultery when he slept with Bathsheba, Uriah’s wife he ended up killing in the process as we see in 2 Samuel 13:1-27 which was a very evil thing he did in the sight of the Lord.

After committing this dreadful sin, we see that God punished King David for this dreadful sin. One of such punishments was murder and incest, which arose in his own family where Amnon Slept with Absalom’s Sister, Tamar (2 Samuel 13:1-39).

Absalom later killed Amnon as you read further in the above chapter. Even if David was punished for his disobedience to God, the good news is that unlike many characters you will see below, he repented and was forgiven and he’s in heaven now.

King Saul is another interesting bible character in the Old Testament who disobeyed God and because of his disobedience; the Lord took away the kingdom he was supposed to rule and gave it to King David.

Saul’s disobedience as we see in 1 Samuel 15:7 was that he didn’t fully carry out the instructions that the Lord commanded him to do through His prophet Samuel concerning the Amalekites in 1 Samuel 15:1.

When you read the above chapter further, you will see that King Saul only partially carried out what God commanded him concerning the Amalekites by sparing Agag with the sheep and animals they had instead of destroying them as instructed.

As a result of this blunder, the Lord ended up rejecting King Saul from being king of Israel as we see in 1 Samuel 15:10-30 even though he tried to remedy the situation by offering burnt offerings that God rejected as well.

Here we see the danger of having the fear of man when it comes to obeying God. Saul failed to fully carry out God’s instructions due to the fear of man, which made God reject him from being king, and later died by killing himself (1 Samuel 31-1-5).

Another bible character who disobeyed the Lord in the bible was King Ahab who did many wicked and evil deeds in the sight of the Lord than any king who was before him.

The first act of disobedience he did against the Lord was marrying the evil queen Jezebel who practiced witchcraft and was an idol worshipper as we see in 1 kings 16:30-33 who negatively influenced King Ahab to do the same.

Secondly, due as a result of marrying an evil queen who was an idol worshipper, he started worshipping idols like Baal as well and influenced the Israelites to do the same by erecting altars and temples for Baal.

Consequently, the Lord sent Elijah to tell King Ahab as we see in 1 Kings 21:17-29 that he will be punished for his disobedience and for killing Naboth who did nothing wrong after listening to the wicked advice of his wife.

He repented though momentarily but he later died in the end after being hit by an arrow as we see in 1 Kings 22:34,35 which was prophesied earlier. This is what disobedience can do to anyone who does it.

King Rehoboam is another king of Israel who disobeyed the Lord and his disobedience as we see in 1 Kings 12:1-12 is that he refused to heed the wise advice his elders told him concerning the Israelites.

Instead of heeding the wise counsel, his elders told him in 1 Kings 12:8, he instead choose to listen to the wrong advice he wanted to hear that his young adviser gave him concerning how he should handle and treat the Israelites concerning work.

His young advisers encouraged him to be harsher to the Israelites and increased their burdens of work contrary to what his wise advisers advised him against earlier.

Because of this, there was an uprising among the Israelites who refused to submit to King Rehoboam as he refused to lessen their burdens and returned to their homes (1 kings 12:16-18).

Due to his disobedience to wise counsel, the Lord turned the Israelites against him such that he had to escape for his life in a chariot when his supervisor Adoniram was stoned to death by the Israelites (1 Kings 12:18,19).

I am sure you are very familiar with the story of Lot’s wife as taught in the book of Genesis 19:1-26 who was instructed not to look back as she was fleeing the twin wicked cities of Sodom and Gomorrah the Lord was about to destroy.

However, as you read further in the book of Genesis 19, you will discover that Lot’s wife didn’t heed God’s instructions He told her through His angels not to look back but to flee for their lives.

As a result of this gross disobedience, Lot’s wife ended up looking back from behind her as fire and brimstone rained down over the cities of Sodom and Gomorrah which ended in her turning into a pillar of salt.

The case of Lot’s wife is a gruesome reminder of how quickly God’s judgment can come to any wicked person and to all those who don’t obey His simple instructions or choose to live in disobedience.

This is why our Lord Jesus Christ reminds us in Luke 17:32 that we must remember Lot’s wife so that we don’t end up like her as a result of her disobedience.

This post will not be complete if Adam and Eve were not included as they were the first created humans who directly disobeyed God by eating the forbidden fruit as we see in Genesis 3:1-24.

The disobedience of our first parents is where original sin began which is why we are all born sinners with an inherent sinful nature that naturally makes us want to rebel against God and His commandments.

Our first parents were commanded in Genesis 2:17 that they were not supposed to eat of the knowledge of good and evil but did it anyway.

As a result, they were banished from the Garden of Eden and had to die a mortal death as God promised them if they disobeyed but the good news is they repented though they had to face the consequence of their sin.

The disobedience of our first parents and its effects can be felt up to today. Their disobedience is the reason the world we live in is full of pain, evil, suffering, death, natural disasters, etc. but the good news is God has promised to rid evil once and for all in the end (Rev 21:4).

See Also: 13 Characteristics Of The Sinful Nature That We All Have.

Last but not least, Ananias and Sapphira are other interesting bible characters in the new testament in this case who also disobeyed God by lying to the Holy Spirit after selling their land.

The story of this couple begins in Acts 5:1-11. As we see in that chapter, Ananias and Sapphira were married couples who decided to sell a piece of property.

After selling their property, instead of giving all that they sold to the apostle’s feet, they only gave part of what they had sold, and to make matters worse, they lied in the process by only giving part of the money they got after selling the property of theirs.

Consequently, the apostle Peter rebuked him in Acts 5:3 as to why he had done such an evil thing of lying to God and others instead of being honest about what he had sold. He died after hearing what Peter told him.

Sapphira was next in line and did the same thing her late husband did by not being honest with the money they made after selling the land. She too fell to the ground and died as we see in Acts 5: 9,10. That’s what simple disobedience to God can do at times.

I hope the above 7 ungodly characters in the bible who disobeyed God and suffered the consequences for that will remind you not to follow in their footsteps.

However, you can still repent today if you are ungodly and live a sinful life of disobedience like the way King David did when he sinned, and have your sins forgiven today as it’s not too late.

In closing, if this post has been of great benefit to you, let me know in the comments below, and don’t forget to share before you leave and strive to be a godly person. Godspeed. 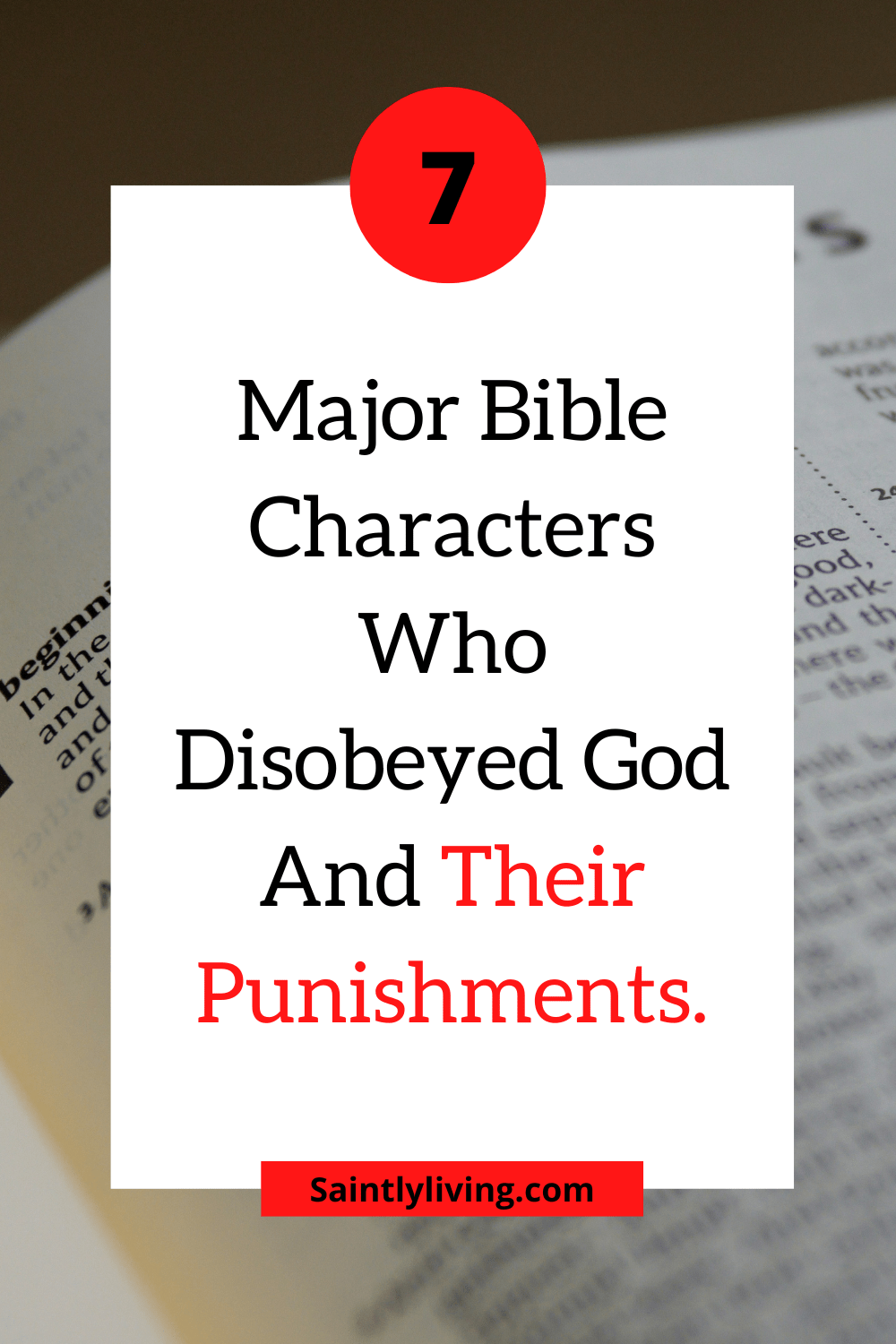